TORONTO -- Two former student trustees with the Hamilton-Wentworth District School Board (HWDSB) are demanding the impeachment of staff allegedly involved in incidents of racism—including the use of racial slurs—as well as a transparent and open investigation into what they call a “systematic oppressive institution.”

The allegations were first brought forward by the 2019-2020 student trustee Ahona Medhi, who took to social media following the conclusion of her term to say she was “beyond grateful to no longer serve as the board's token for student voice and diversity.”

Medhi repeated the allegations at a news conference held on Monday morning, where she stood beside other students and a second student trustee who say they experienced similar incidents of systemic racism within the board.

Speaking to reporters, Medhi said that she endured racial gaslighting and micro-aggressions while in her role, and that it took a toll on her mental health.

She specifically alleged that a white trustee had used the n-word in reference to Serena Williams, and then went on to say “or Black, or whatever you call them.”

“As if this was a correction to her use of a racial slur,” she said.

“Prior to another board meeting, I bared witness to a conversation surrounding how Muslims and Arabs were evil, anti-Semitic and violent. The trustee who initiated the conversation finalized that we shouldn't have discussions in regards to the Middle East. It was hopeless and there was nothing we could do to help such people.”

Medhi also alleged the same trustee said “Black leadership was too prevalent” within the school board.

“As a racialized representative, this was disturbing to me as the education system is first and foremost intended to serve students,” Medhi said. “This is not a difficult or a complex concept.”

“But I want to emphasize that the issue of systemic racism goes far beyond my own experience. This is about the fact that the board actively and deliberately belittles disregards and villainizes the most vulnerable of our staff and students.”

No, I'm not grateful to have been in this role. In all honesty, it was the most patronizing experience of my life.

I'm beyond grateful to no longer serve as the board's token for student voice & diversity.

Ruby Hye, the student trustee for 2017-2018, was also present at the news conference and said that when she first went to a board meeting she was told that “it’s good that there is some diversity.”

“That set the tone for the entire year,” Hye said. “It became very clear to me throughout my interactions with trustees and the board throughout my term that my role was tokenistic, that my voice was nothing more than an image for them, it was for the prospect of having a brown face on their media things.”

Hye went on to say to that a supervisor for the secondary student senate refused to look her in the eye during meetings and if she put forward an idea, he would thank her white counterpart. When she brought the allegation forward, she was forced to sit in one-on-one meetings “to divulge my pain, experience of racism, to prove that I had lived racism at the hands of this person.”

She also said that during a mental health advisory committee meeting she asked the psychologist keynote speaker about strategies regarding racialized students and mental health.

“There are specific culturally-relevant supports that exist for students who are racialized, were Black or Indigenous and have certain mental health needs,” Hye said. “I was met with ‘this isn’t the space to talk about race, race is not relevant here.’”

“There was a lot more, but it was clear to me that trustees didn't actually want my role as student trustee to be one of advocating for students, but one where I kept my head down and did not speak up. The environment for me to safely discuss instances of racism and how racism informs policy and operates in the school board did not and does not exist.” 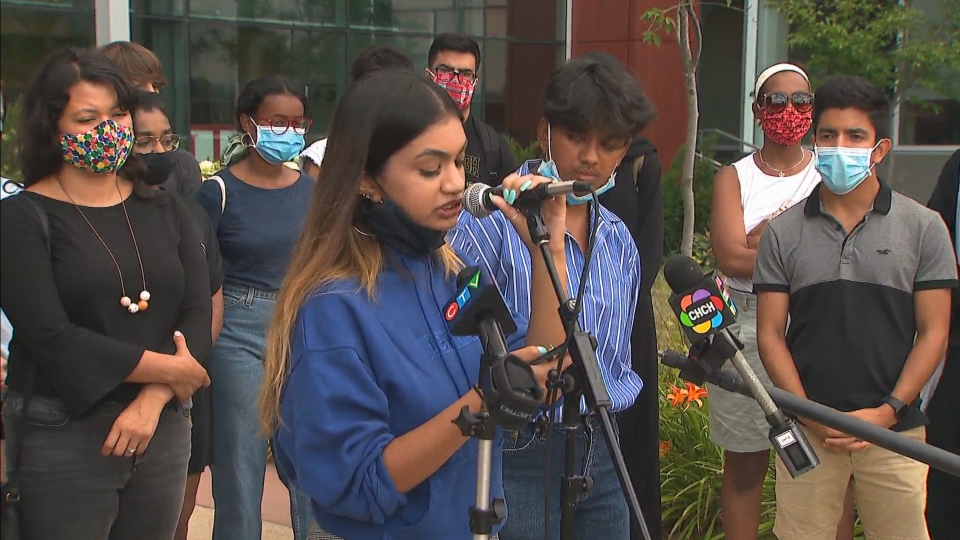 In response to the allegations, the HWDSB said that a third-party code of conduct investigation will be held “to understand and address all of the concerns raised.”

“A former student trustee at HWDSB has brought forward serious concerns about racism and oppression,” the statement reads. “As an educational institution, we are committed to taking action that builds a culture of equity and inclusion.”

“We believe that it is vital to advance the work of equity and anti-racism. Anti-racism and anti-oppression training will continue to roll out in HWDSB for elected officials and staff in the 2020-21 school year among many other actions.”

Speaking on Monday, the chair of the HWDSB said that she was “deeply shocked” to hear about what the students experienced.

“Experiences like the ones Ahona and Ruby highlighted should never have happened. As a board we will be committed to taking action,” Alex Johnstone said.

Medhi and Hye are both calling for transparency, as well as public and student consultation, for all equity and anti-racism training provided to trustees.

They also want the results of the third-party investigation to be released to the public and for all trustees involved in anti-Black and racist incidents to be impeached by the board.

“If there truly is zero tolerance for racism…then demonstrate it,” Medhi added. “We know that the board is counting on us to quiet down. And they’re counting on us being silenced, but we will not be silenced and we will continue to fight.”

The HWDSB says it hopes to name the third-party investigators by the end of this week.