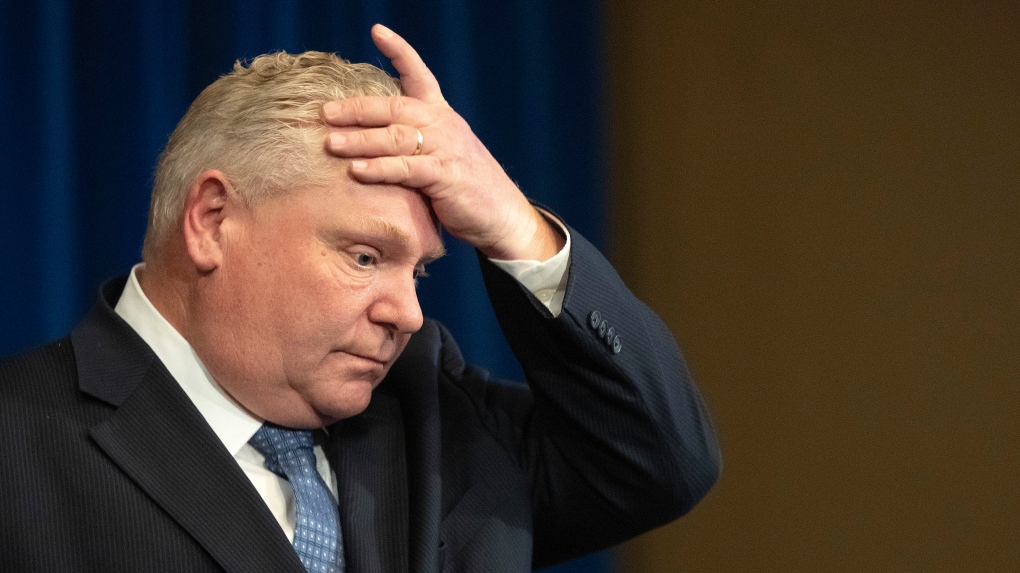 Ontario Premier Doug Ford is seen in this photo. (The Canadian Press)

TORONTO -- Facing a slew of questions around the provincial government’s slow response to widespread COVID-19 testing and infection control protocols in long-term care homes, Premier Doug Ford said he has had no choice but to rely on the advice of public health experts amid the pandemic.

“There was many people, I was one of them, sitting there beating the drum saying we need everyone tested,” Ford said. “As much as people may think I can jump in there and overturn what the chief medical officer says, I can’t.”

Ford says that while he has confidence in Dr. David Williams and the COVID-19 command team, he has been frustrated at times with the decisions that have been made.

“Maybe in the future, maybe that is one of the cracks in the ship. By no means am I a medical professional, (a) health professional,” he said.

“I have confidence in our health table and yes, do I push them? 100 per cent I push them, but I’m not a medical professional. I rely on them to move things forward. There is no one that has been pushing the health table more than I have.”

Two weeks ago, provincial public health officials face heavy criticism over the lack of testing being done in Ontario, which at one point had the lowest rate of testing per capita among all provinces in the country.

The premier subsequently called on health leadership to ramp up testing in the province, adding that he wanted to see every single long-term care resident and health care worker in Ontario tested for the virus.

Public health officials have ramped up testing in recent weeks and Ontario is expected to have the capacity to process more than 16,000 specimens per day come May 6.

Ontario reported 510 new cases of the virus on Wednesday, bringing the total number of cases in the province to 12,245, including 659 deaths and 6,221 recoveries.

There were 10,361 tests that were completed on Tuesday, the first day the province has surpassed the 10,000 mark.

COVID-19 has devastated long-term care homes around Ontario as the virus continues to swiftly spread through the homes and other congregate setting. According to the figures released by the ministry of long-term care on Tuesday, approximately two thirds of all people who have died after contracting the virus have been residents of long-term care facilities.

“I think we should change a lot of things after this pandemic, right across all jurisdictions, all levels of government. As I’ve said, you see the cracks in the ship and you have to fix them,” Ford said. “But I will always rely on the advice of our medical professionals, health and science.”

Speaking at a news conference on Wednesday, Willilams said he has given the premier "the best advice" he can.

"But we need the power and authority of the ministry as well as the minister and the premier to back up those with resources and materials so we can get on and get the task done," he said. "I applaud the premier for making that stance."

Williams said there were some challenges initially with testing but the province has now overcome that.

"I think the frustration that the premier has is the same frustration I’ve had. At different times we would have really liked to ramp up a lot more testing, a lot more things quicker. We were limited first by reagent and swabs," he said.

"The premier definitely wants to get this moving, wants to get it over with, would like to decrease the deaths as quickly as possible."