QUEEN'S PARK -- Ontario's Progressive Conservative government is backing down on its controversial class size and mandatory e-learning policies in an attempt to break the impasse with the province's education unions.

In a sudden announcement on Tuesday, Education Minister Stephen Lecce said the government will increase class sizes in Ontario high schools from the current provincial average of 22.9 up to an average of 23 students per classroom.

The government also announced that its mandatory e-learning policy – requiring high school students to complete two online courses in order to get their diploma – is also being changed.

Parents will be given the ability to opt-out on behalf of their children, the government said, making the requirement all but void.

"We have been negotiating for hundreds and hundreds of days with an impasse," Lecce said on Tuesday. "The ball is in their court now. We've made a significant move that is in the interest of students."

But as part of the new offer, the government is not budging beyond an offer to increase wages and benefits by one per cent a year, and wants concessions on a regulation that dictates seniority-based hiring.

The Progressive Conservatives angered teachers last March when they announced they would increase average high school class sizes from 22 to 28 -- which would lead to thousands of fewer teachers in the system -- and require students to take four e-learning courses to graduate.

The government partly backed off on both issues last year, but the unions had said the concessions didn't go far enough, and they continued to ramp up strikes.

"We believe that online learning provides a multitude of benefits for students, particularly when it comes to diversifying the course offerings and really embracing 21st-century learning," Lecce said.

"But at the end of the day we have listened and heard that parents want to be in the driver's seat of that decision."

Meanwhile, sources within the ministry of education, with direct knowledge of the changes, tell CTV News Toronto the four main education unions "have all seen the proposals" and that the moves are intended to signal to parents that "the [government] is not the bad guy at the table."

School boards will learn of the new class size averages at the same time, the source said, in an effort to blunt complaints from boards that are currently mapping out the 2020-2021 school year. 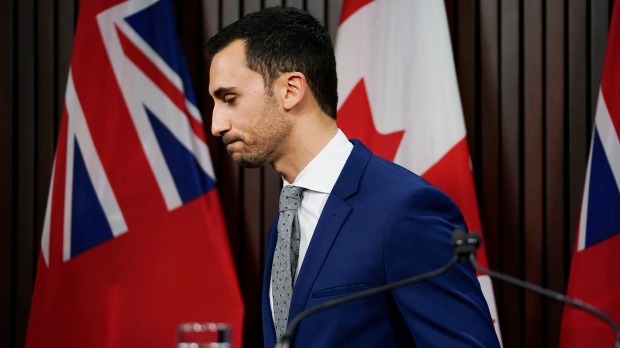 “We recognize that some school boards are coming up against the clock in terms of staffing decisions, and this will be communicated immediately,” the source said.

This is the second time the government has been forced to back down on its money-saving measures that unions argued would negatively impact the quality of education for Ontario students.

The government originally intended to increase the average class size in high schools to 28:1, before dropping the ratio to 25:1, and finally moving to 23:1. The government also wanted students to complete four mandatory online courses in order to graduate, before it was forced to cut that requirement in half, and finally introduce an opt-out clause.

In exchange, however, the government is calling on the unions to cancel a planned strike on Thursday and make room for "good faith bargaining." 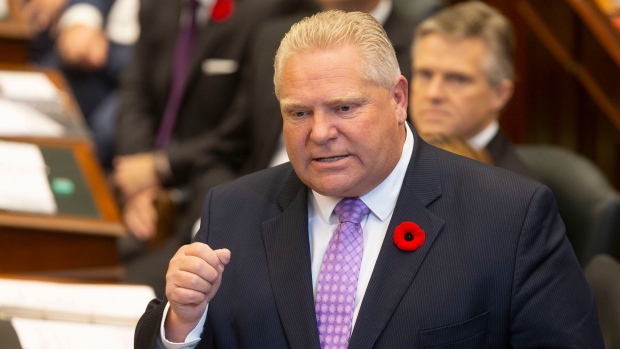 "I am asking the teachers’ unions to return to the table, in light of this reasonable offer, to reach the agreement parents want, and students deserve," Lecce said in a statement.

"If the unions reject this most recent, student-centric offer, parents should rightly be asking what exactly are the priorities of the unions."

The government said, however, it is sticking with its compensation requests – one per cent per year for a three year contract – because it was enshrined in legislation that the Ford government passed before negotiations began.

"We were still in active discussions and this minister chose to roll a hand grenade out on the table," he said. "I would like to see him bring proposals to the bargaining table."

Liz Stuart, president of the Ontario English Catholic Teachers Association, said their union is "prepared to accept the salary they have offered" in exchange for lower class sizes, elimination of mandatory e-learning.

Stuart cautioned however that she wants the government to return to the same staffing levels as 2018-2019 – a provincial average of 22:1 -- which would allow school boards to hire hundreds more teachers across the province.

The unions also noted that when the government previously backed down to a 25-student class average, the move came with a "poison pill" because local class-size limits would be removed, essentially allowing the province to see the number of students per class climb indefinitely.

Lecce wouldn't confirm Tuesday if that was still part of the offer, saying those discussions will happen at the bargaining table.

The minister said his proposals aren't new to the unions, but they said Tuesday was the first they had heard of them.

The Elementary Teachers' Federation of Ontario noted that Lecce is not reversing the elementary class-size increase of about one student per class, to an average of 24.5. It took effect this year. ETFO president Sam Hammond said he is also not satisfied by the special education commitment, which he characterized as partial.

"We have learned from past experience that Minister Lecce's public announcements do not necessarily translate into negotiating proposals at the table," Hammond said in a statement