Ford admits he knew of Ontario finance minister's vacation two weeks ago, regrets not asking him to return

TORONTO -- Premier Doug Ford said he should have told finance minister Rod Phillips to return back to Ontario when he found out the minister travelled out of the country for a holiday vacation.

Ford made the comments Wednesday afternoon during a visit to Trillium Health where health officials are preparing to distribute the newly arrived Moderna COVID-19 vaccine to Peel Public Health.

Ford said he didn’t know Phillips was planning to travel, but said that when he found out about the trip two weeks ago he should have told Phillips to return home right away.

“He never told anyone he was leaving. He never told me he was leaving. I did call him shortly after he arrived and I talked to him and asked where he was. He said he was away, said is this going to be an issue? My mistake, and I take full responsibility. At that time, I should have said get your backside back into Ontario and I didn’t do that,” Ford said.

The premier said he is “very upset” and frustrated with the situation as public health officials have been urging Canadians to avoid all non-essential travel for months amid the pandemic.

“I stand out here every single day and tell people to stay at home. People are losing their businesses, we’re locking things down and it’s unacceptable that anyone, any elected official, myself included or anyone, gets off and ignores the rules and goes down to an island,” Ford said.

In a statement on Tuesday, Phillips said he left on a trip to St. Barts on Dec. 13 after the end of the legislative session.

The minister said he made the decision to travel not knowing the province would be placed under lockdown on Boxing Day.

“I deeply regret travelling over the holidays. It was a mistake and I apologize,” Phillips said in a statement.

CTV News Toronto also learned on Wednesday that Phillips travelled to Switzerland in August and did quarantine for 14 days, according to a statement from the Ministry of Finance's office.

Ford said he had a conversation with Phillips the other day and that the minister should be back home tomorrow.

The premier added that the two will have a “tough conversation” once he returns home.

“It’s unacceptable and we’re going to have a very tough conversation when he gets back,” Ford said. “But I can tell you there can’t be rules for elected people and non-elected people.” 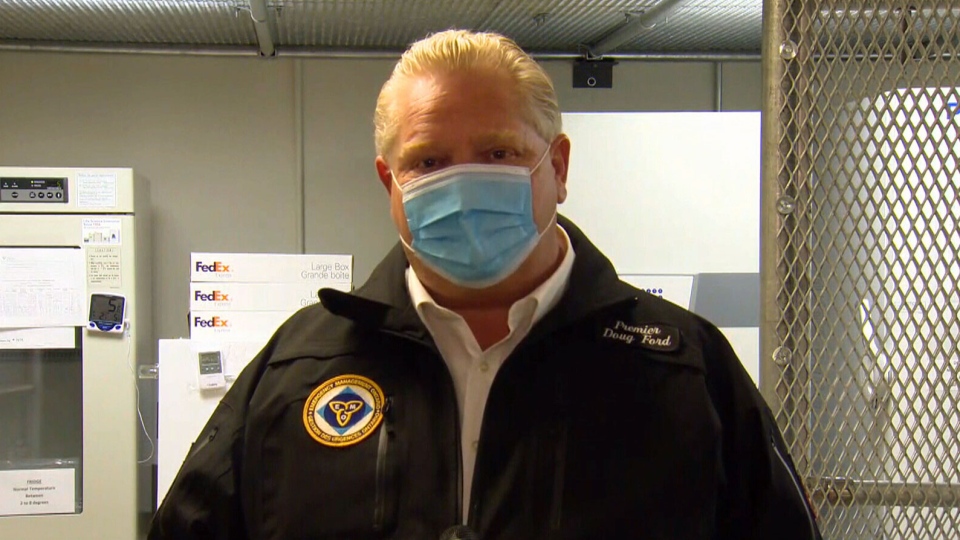 On Wednesday, NDP leader Andrea Horwath said Phillips should be removed from cabinet over his decision to disobey his own government’s advice about staying home.

"It's shameful, it's a disgrace and shame on Doug Ford for knowing that this was the case and simply turning a blind eye," Horwath told CP24 on Wednesday.

“...There has to be some accountability for these kinds of things. I mean, he has obviously no integrity whatsoever and he does not deserve to sit as the Minister of Finance in this province. Ontarians deserve better than that, so Ford has to fire him," she added.

Meanwhile, Ontario Liberal leader Steven Del Duca told CP24 on Wednesday that both Ford and Phillips are "undermining the confidence" that Ontarians have in their leaders.

He added that it's also troubling that Ford said in a statement yesterday that he was not aware about Phillips' travels and that today he's saying otherwise.

"I served in cabinet for four years. I find it impossible to believe that a senior cabinet minister would leave the country and that a premier or premier's office wouldn't know. If they didn't know, they're incompetent. If they did know, they're not being honest with the people of Ontario, neither outcome is actually acceptable," Del Duca said.

Phillips said he will begin a 14-day quarantine when he returns home.