TORONTO -- Anti-pipeline protesters in Belleville, Ont. have forced VIA Rail to suspend service between Toronto, Montreal and Ottawa for the second day in a row.

The protests, in support of the Wet’suwet’en First Nation, come after six people were arrested near a worksite in northern British Columbia where the RCMP had recently enforced an injunction against the Nation’s hereditary chiefs and their supporters.

At issue is the $6.6-billion Coastal GasLink pipeline, which will deliver natural gas from the Dawson Creek area to a facility near Kitimat, B.C.

The company behind Coastal GasLink has signed agreements with 20 elected First Nation councils along its 670-kilometre path with the exception of the Wet'suwet'en who say the project has no authority without their consent.

As a result of the protests in Belleville, service between Ottawa and Toronto and between Montreal and Toronto has been interrupted in both directions as VIA Rail works to refund tickets for affected trips.

“VIA Rail will be automatically refunding all segments affected by this service disruption. Please note that your refund may take up to 10 days to process,” the company says in an important notice on their website.

VIA Rail goes on to say that none of the trains on these two routes will operate until the issue is resolved.

The Ontario Provincial Police said that they are monitoring the protests.

In a news release, the group behind the demonstration said they chose the CP tracks as the site of their protest due to the company’s involvement in transporting pipeline materials to B.C. 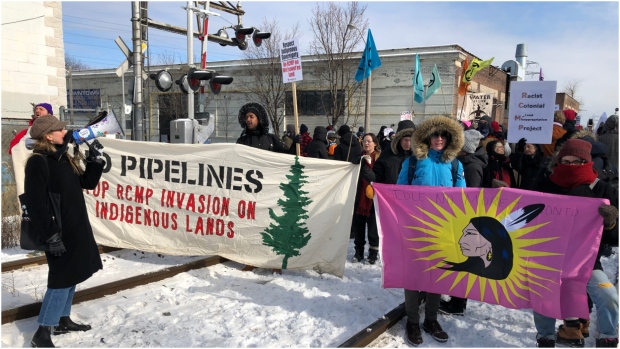 “The Coastal GasLink project needs to be permanently stopped, and the RCMP must leave the territory immediately as the Hereditary Chiefs have demanded,” Alie Hermanutz, a protest supporter, said in the release.

Speaking to CP24, Indigenous environmental justice advocate Vanessa Gray says the RCMP is attacking the Wet’suwet’en people standing in the way of the pipeline’s construction.

“There are families living on the territory, they have been living there for years, there are different clans and Hereditary Chiefs who all are opposed to the Coastal Gaslink pipeline,” Gray said.

Hundreds of demonstrators blocking CP freight rail line near Dunpot and Dufferin to protest against the RCMP moving in on Wet’suwet’en territory in BC @CTVToronto pic.twitter.com/CC7EYXsyAp

“They have every right to be in their own land and territory and we’re here to shutdown Canada until the RCMP stand down.”

Toronto Police told CP24 that they are aware of the protest, but as long as the demonstrations remain peaceful, officers will not take any action.