Fired hockey commentator Don Cherry declined to apologize Monday for comments he made about newcomers which cost him his job.

“If I had gone on and said a few things and done a few things I definitely would have been back,” Cherry said in an interview with Newstalk 1010.

Cherry was removed from Sportsnet Monday following a rant on Saturday’s Hockey Night in Canada in which he implied that immigrants in Toronto are not paying their respects to Canadian veterans by wearing poppies.

He singled out those he believes are immigrants in Toronto, prompting a swift online backlash.

"I live in Mississauga ... very few people wear a poppy. Downtown Toronto? Forget it, nobody wears a poppy."

In a statement released Monday afternoon, the president of Sportsnet said that Cherry’s comments “do not represent our values or what we stand for.”

"Following further discussions with Don Cherry after Saturday night’s broadcast, it has been decided it is the right time for him to immediately step down,” the statement reads.

For his part, Cherry denied that his comments targeted any particular group.

He added he stands by his insistence that everyone should wear a poppy.

“What I meant was everybody, everybody and I mean everybody should be wearing a poppy to honour our fallen soldiers who gave their lives for our way of life.”

The firing of Cherry came hours after the Canadian Broadcast Standards Council (CBSC), the agency that deals with viewer and listener complaints across Canada, put a statement on their website saying their “technical processing capacities have been exceeded.”

"The CBSC has received a large number of very similar complaints concerning ‘Coach’s Corner’ broadcast on CBC (Sportsnet) on Nov. 9, 2019," the statement said.

"While the CBSC will be dealing with this broadcast under its normal process, it is not able to accept any further complaints."

The Royal Canadian Legion took to social media Monday afternoon to all Cherry's opinion "hurtful, divisive and in no way condoned by the Legion."

"We know many new Canadians understand and welcome the tradition of the red poppy and will continue to educate all citizens about the significance of this powerful symbol," the Legion said in a tweet. 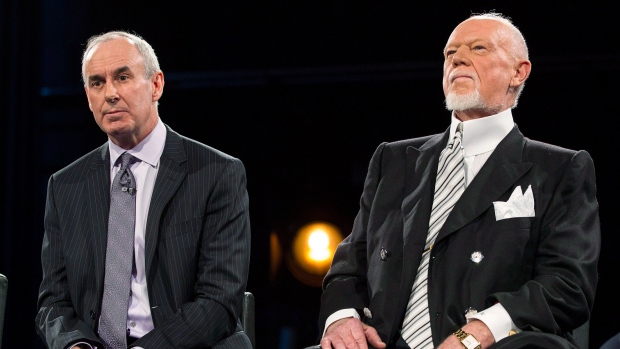 Mississauga Mayor Bonnie Crombie said over the weekend that Cherry's comments were "despicable."

"We’re proud of diverse cultural heritage and we‘ll always stand up for it," Crombie said on social media.

Toronto Mayor John Tory also commented on Sunday, saying that the rant was "way off base."

Don Cherry is way off base to question the devotion of newer Canadians to the very same veterans and the sacrifices we will honour tomorrow on Remembrance Day. His comments are unfair and just plain wrong.

Some residents of Mississauga, where Cherry lives, were surprised to learn that Sportsnet had cut ties with the commentator on Monday afternoon. Speaking to CTV News Toronto outside a local hockey rink, one resident said that he did not appreciate Cherry’s comments over the weekend.

“I don’t know why you would divide between any kind of Canadians. We are all Canadians,” said Chris Pearson.

Pearson said that he met Cherry once and that he was “a great guy when he met him.”

“I am surprised he was let go because he has said things like this in the past.”

Another resident said that the comments seem “like one in a long string of things” that Cherry has said.

“Maybe this was too much, too far. It might be time for it to be honest.”

At the same time, others say that the comments were taken out of context and that the message is appropriate if applied generally to all people.

“I think the message is positive, go buy your poppies,” said one resident identified only as Adam. “It’s kind of a tricky situation.”

The National Hockey League, Sportsnet and co-host Ron MacLean have all issued statements condemning what Cherry said on the program. Cherry has not commented thus far.

Cherry played professional hockey until 1969 and then coached both the Boston Bruins and the Colorado Rockies. He joined ‘Coach’s Corner’ as a sports commentator in 1982 after he retired from the sport.

The broadcaster was never one to shy away from his own political opinions. In 2010, Cherry appeared at Toronto Mayor Rob Ford’s inauguration in a pink floral-patterned suit “for all the pinkos out there that ride bicycles and everything.” He added that left-leaning politicians in Toronto and their supporters “scrape the bottom of the barrel.”

In 2017, Cherry criticized the media for their coverage of athletes kneeling during the playing of the national anthem to protest the treatment of black people by American police. 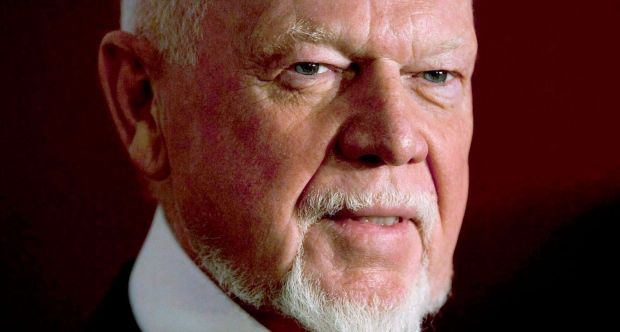 Hockey Night in Canada was a longtime CBC Saturday night staple, but the show and its games moved to Sportsnet when Rogers landed a 12-year, $5.2 billion national broadcast rights deal with the NHL that began in 2014.