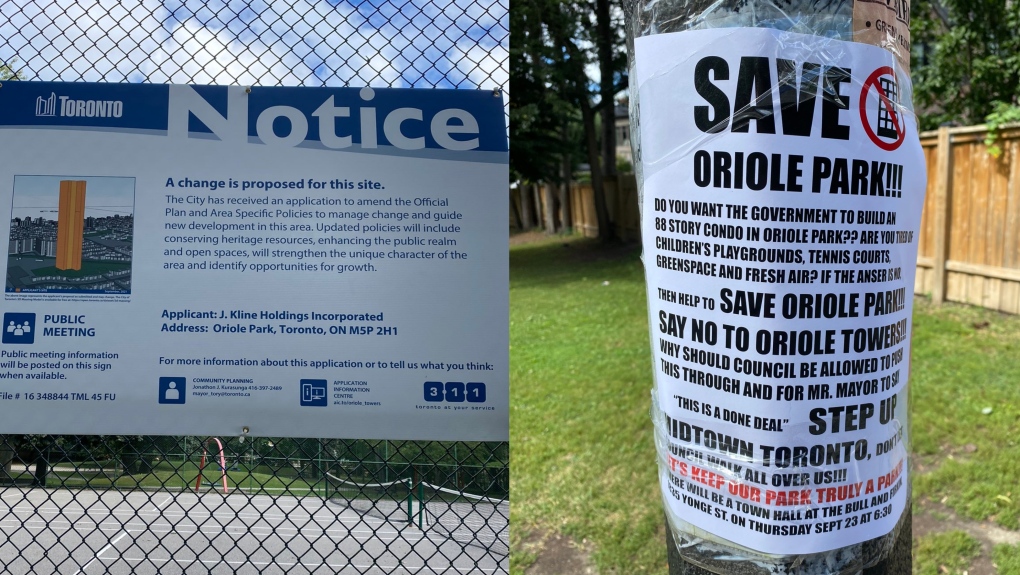 TORONTO -- A development notice placed at a midtown public park informing residents that an 88-storey condo is slated for construction on the property has been confirmed to be fraudulent.

The notice was placed at Oriole Park, near Yonge Street and Chaplin Crescent, in the Davisville area.

“Someone has created a fake development notice, pretending a condo tower is being proposed in the middle of Oriole Park. It’s not true,” Matlow wrote.

“I’m trying to figure out why someone went through the effort of scaring the community like this.”

Matlow confirmed to CTV News Toronto that the phone number, email address, and city staff name listed on the poster do not exist and that no such person is employed at the City of Toronto.

This is really bizarre. This is a first. Someone has created a fake development notice, pretending a condo tower is being proposed in the middle of Oriole Park. It’s not true. I’m trying to figure out why someone went through the effort of scaring the community like this. pic.twitter.com/OY07J0Jyx5

In addition to the fraudulent development notice, another poster asking residents to "save Oriole Park" was placed on the property.

“Do you want the government to build an 88-storey condo in Oriole Park? Are you tired of children’s playgrounds, tennis courts, green space and fresh air? If the answer is no, then help to save Oriole Park,” the poster reads.

When reached out for comment Friday, the City of Toronto confirmed to CTV News Toronto that the signs were indeed fake.

“Confirming that this development sign is a fake and no such development is planned,” chief communications officer for the city, Brad Ross, said.

“Staff will attend the park, if they haven’t already, and have it removed.”

Matlow says his neighbourhood was upset by the poster.

“People actually were really shaken up. They were worried, they were angry. It wasn't even so much about development, it was the fear of losing their park,” he said.

While Matlow says he has seen fake signage placed before, he hasn’t seen one that looked this authentic.

“Unlike efforts a few years ago, where there were like some satirical signs put up in the city, this was done in a way that was deliberately deceptive,” he said.

“There was no tongue in cheek, so it’s very mysterious as to what the motivation was behind it.”

Ross says he can’t speak to why the sign could have been placed.

“From time to time we see attempts to confuse the public for reasons I don’t understand. You’d need to speak with those responsible to understand their motivation,” he said.