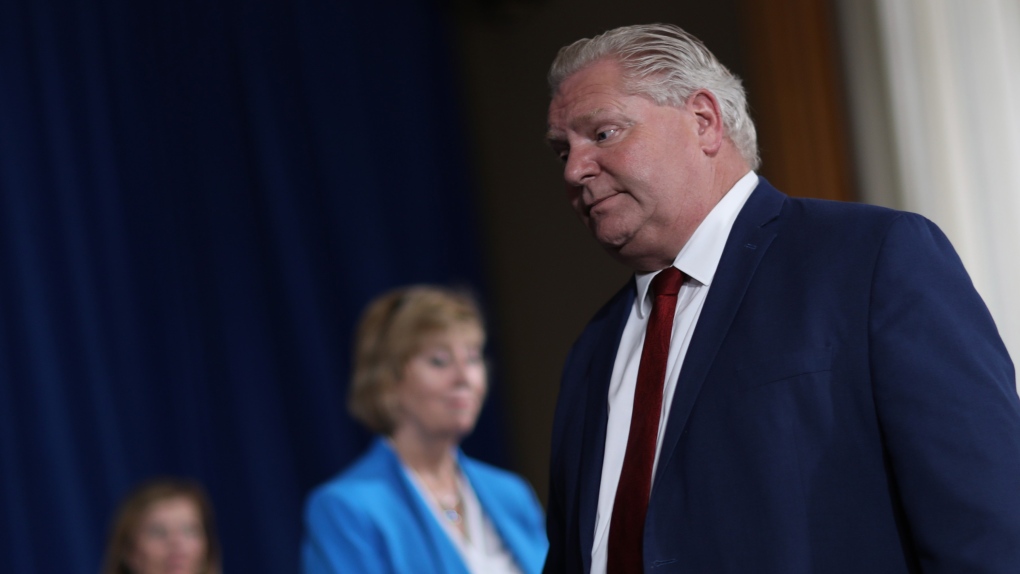 TORONTO -- Ontario Premier Doug Ford says racism does exist in this country, less than 24 hours after saying that Canada doesn't have the same “systemic, deep roots” of racism as the United States.

Ford’s comments came during a sitting at Queen’s Park Wednesday, when the premier was asked by Opposition Leader Andrea Horwath about her call for the immediate collection of race-based data as it relates to COVID-19.

“I do not have those lived experiences and I can empathize with them. But again Mr. Speaker, a lot of us have never lived that, we’ve never walked a mile in someone’s shoes that has faced racism. Not only just in the black community, a lot of minority communities, throughout the history of Ontario and Canada have faced racism.”

The comments are different from what the premier said Tuesday when asked about protests in cities across the U.S. sparked by the death of George Floyd, an unarmed black man, at the hands of a white police officer in Minneapolis.

“Thank God that we’re different than the United States and we don’t have the systemic, deep roots they have had for years,” Ford said at the time, a comment that has been met with sharp criticism online.

Earlier that same day at the Ontario legislature, Scarborough-Guildwood MPP Mitzie Hunter and Don Valley East Ontario MPP Michael Coteau asked Ford about the state of racism in the province and what actions we’re being taken to combat discriminatory behavior.

“Right now, will you tell the people of this province that you are going to be taking concrete steps to eliminate anti-black racism and racism in all its forms in this province and restore full funding to the Anti-Racism Directorate (ARD) and the Black Youth Act,” Hunter asked.

Yesterday @coteau and I asked the Premier about concrete actions he would take to address anti-black racism in Ontario. We were met with empty words.

Talk is cheap. Today we wrote to @fordnation to ask him to get to work. #onpoli #scarbTOhttps://t.co/r3XuP7uKku

According to the government’s website, the ARD “works to eliminate systemic racism in government policies, decisions and programs, and advance racial equity in Ontario for Black, Indigenous and racialized populations.”

Ford responded by saying that he had “zero tolerance for racism.”

“That’s why 99 per cent of us, we all get along. There’s always bad apples no matter what profession it is. But I can tell you the black community knows I have their back and I’ll always, always have their back.”

However, in an open letter to the premier released today, the liberal MPPs said the fight against systemic racism is about more than “past statements or personal good works.”

“It is about reforming and changing the ways in which our society is set up in order that Black, Indigenous and other people of colour are free to live their lives and pursue their livelihoods. As premier of the province, you need to take clear, direct and continuous action to reform the ways in which our society disadvantages Black, Indigenous and other racialized communities,” the letter reads.

“Premier, caring and condemning racism are not enough. We need concrete, determined and sustained efforts by your government to create lasting societal change.”

Leader of the Green Party of Ontario Mike Schreiner reiterated Hunter and Coteau’s points on Wednesday.

NDP MPP Gurratan Singh echoed those calls earlier today while saying that Canada and Ontario are "built upon systemic racism."

After Premier Doug Ford claimed that Canada doesn't have the same kind of systemic racism that exists in the U.S., NDP MPP @GurratanSingh says Canada and Ontario is "built upon systemic racism."https://t.co/QlHJSBJgBs#onpoli pic.twitter.com/0bGVInfozH

Ontario Solicitor General Sylvia Jones addressed the question and said that the government has a zero tolerance for racism while saying that there has been “zero change” to the budget of the Anti-Racism Directorate.

In a document titled “Fact Checking Ford” released on Wednesday, Coteau maintains that there has been a $2.06 million cut to the program.