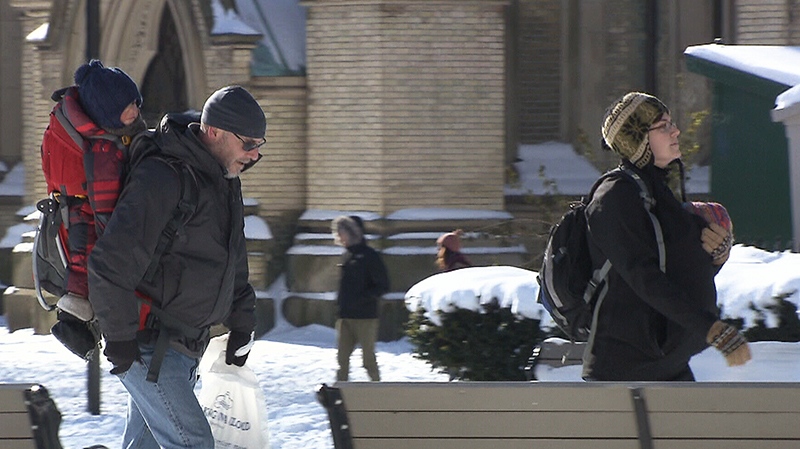 Pedestrians walk downtown as an extreme cold weather alert has been issued in Toronto on Monday, Dec. 16, 2013.

The City of Toronto issued an extreme cold weather alert Monday and is boosting services for the homeless as officials try to convince some of the city's most vulnerable residents to seek shelter.

Monday night the temperature is expected to dip to around -14 C before settling near -4 C Tuesday afternoon.

While the alert is in effect, homeless shelters are relaxing service restrictions and the city says it is adding shelter spaces to accommodate more people who want to escape the cold.

If a bed is not available when a client arrives, shelters must allow the person to stay there until they are able to find a bed at another facility, the city says.

Overnight, street outreach workers will be scouring the downtown core for homeless people and urging them to go to a shelter or another warm place.

The city issues an extreme cold weather alert when there is increased danger to homeless people. The alert is usually called when Environment Canada predicts an overnight temperature of -15 C or colder without the wind chill, a wind chill warning and/or extreme weather conditions such as a blizzard, ice storm or sudden drops in temperature.

Environment Canada has issued a special weather statement for Toronto and portions of the Greater Toronto Area ahead of up to 10 cm of snow possible near Lake Ontario overnight.

The statement was issued shortly before 10 p.m.