Eglinton Crosstown LRT 'on track' for a September 2021 completion

For construction weary drivers waiting for the completion of the Eglinton Crosstown LRT, there’s light at the end of the tunnel.

On Friday, media were given a tour of construction sites at both Science Centre Station and the tracks at Pharmacy and Eglinton to get an update on the projects completion.

The Eglinton Crosstown LRT service will run at times both above and below Eglinton Avenue, between Weston Road and Kennedy Road, and is estimated to cost $5.4 billion to complete.

Construction on the Science Centre station began in 2016 and will include a seven bay TTC bus terminal, retail shopping in an underground concourse and 60 bicycle parking spaces. 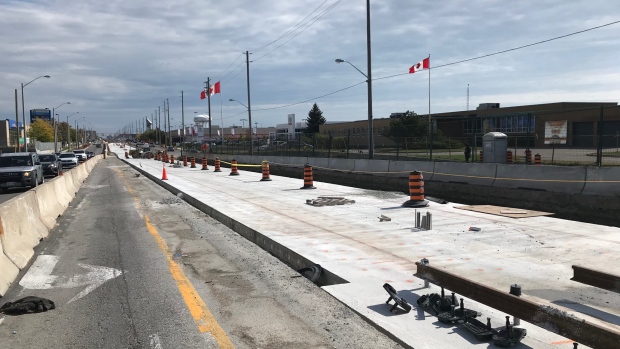 The Science Centre Station is being constructed without a tunnel boring machine. Instead, the “cut and cover” method has been used, making travel in the area particularly frustrating for motorists.

“At the beginning with the shoring and the excavation you have to work really hard, hand-in-hand with the general public and the traffic...it was our biggest challenge”, Nick Britten, supervisor with Crosslinx Transit Solutions, said.

Britten said he’s looking forward to two years from now when the LRT is complete.

“I think it’s going to help Toronto immensely, move the people around,” he said.