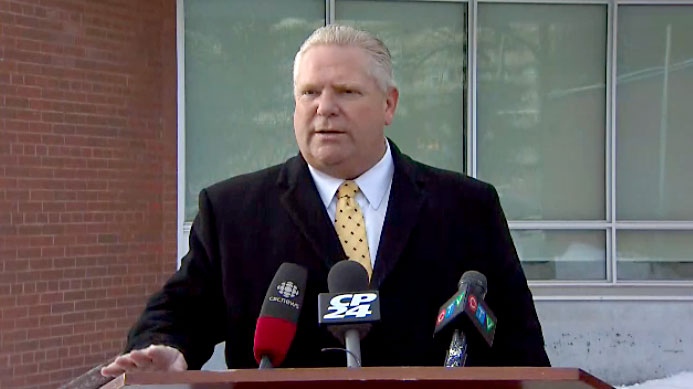 Doug Ford – Seeking to bring his family’s brand of straightforward, no-nonsense public waste-blasting to the Pink Palace, Ford is promising a reckoning for the “elites” and “bureaucrats.”

Speaking of his time as his brother’s closest advisor during Rob Ford’s mayoralty, Ford summed up his approach to government when speaking to TVO’s Steve Paikin on Feb. 15.

“We do what we say we’re going to do, we don’t flip-flop, we make sure that when we promise something, it gets done,” Ford said.

He served as councillor of Etobicoke’s Ward 2 from 2010-2014, during his brother’s mayoral tenure. When his brother fell ill with cancer he stepped in and ran for mayor against John Tory, eventually placing second in a field of three major candidates.

Before Patrick Brown stepped down from his position as leader of the Ontario PC Party, Ford had announced a bid to run for mayor again during this fall’s municipal election.

He then pushed that idea aside for a bid at the PC leadership.

Ford has no previous experience standing for election at the provincial level but did work to help his municipal colleague Raymond Cho win a byelection in Scarborough—Rouge River in 2016. Cho is the only PC MPP who has endorsed Ford to date.

Outside of politics, Ford has served as the president of the printing business his father Doug Sr. founded, Deco Labels and Tags.

He has criticized leadership rival Caroline Mulroney for living in the U.S. for a period of time but failed to mention he also spent a number of years working for his family’s business in the U.S.

He has mentioned little about policy, other than saying he vehemently opposes any form of carbon pricing, even what is promised in the PC party’s latest platform, and wants to increase funding in front-line healthcare.

Prior to the Feb. 15, Ford’s campaign issued a statement saying he wants to review all elements of the public school curriculum in the province, particularly math, but also sexual education.

He promised new consultation with parents if he is elected leader of the PCs, and scolded Brown for “stonewalling” debate about the issue in 2016.