TORONTO -- Premier Doug Ford pushed back at concerns the province’s unused vaccine supply was growing as more questions were raised over whether the geographic distribution of vaccines through Ontario matched up with the need.

Ford told reporters the estimated 1.4 million doses had just arrived and the province was moving quickly to administer them as the federal government marked a milestone of 10 million vaccines delivered to the provinces.

‘We’re doing more than anyone with both hands tied behind our backs with dribs and drabs of vaccines,” the premier said.

“What you don’t tell the people, which I’m telling the people now, folks we just got them two days ago. Over the last few days they just literally landed on our doorstep."

Ontario’s unused vaccines are the largest in the country, though its vaccine distribution as a percentage of total doses delivered — about 63 per cent — is slightly below the country’s average of 65 per cent.

But officials said the stockpile could actually increase as federal shipments come in. Ontario is expected to receive some 3.3 million doses in the month of April. At the current seven-day average of vaccinations, it would take some 45 days to get through that amount. 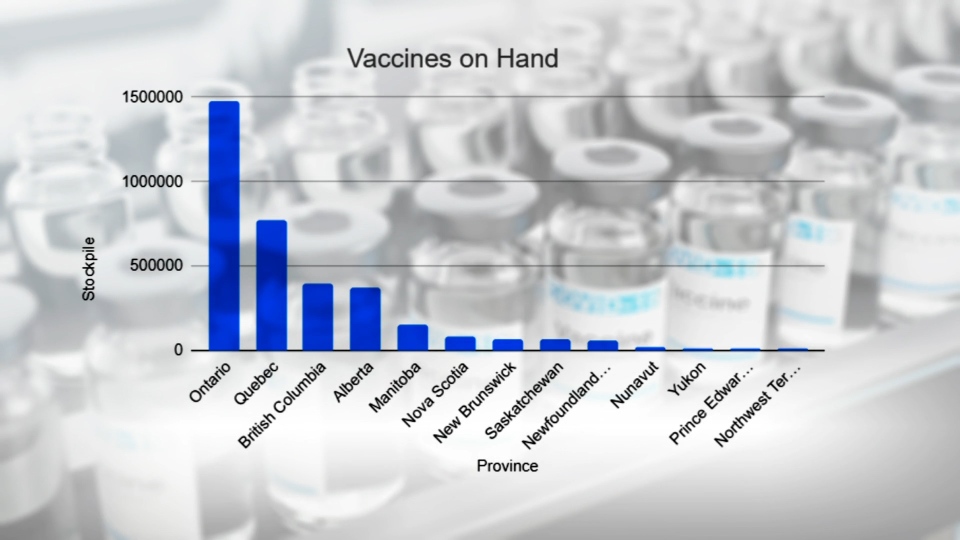 However publicly available figures showed a disparity between the cases in various parts of the province and the vaccines that had been administered in them.

Peel has had 77 times more cases than Kingston, but just 3.5 times as many vaccines, figures show.

That’s a sign that Ontario needs to redirect vaccines to places where people are much more at risk, said Dr. Samantha Hill of the Ontario Medical Association.

“Nothing about COVID-19 has been fair,” Dr. Hill told CTV News. “We’ve called for hot spots to have increasing doses of vaccines. The reason for that is we want to break transmission chains. We don’t want to give COVID a chance to mutate again,” she said.

Brampton councillor Rowena Santos said she hoped that the province would prioritize areas with high case counts as it moves to Phase 2 of its rollout — areas that tend to have higher numbers of essential workers who are at risk because they can’t work from home.