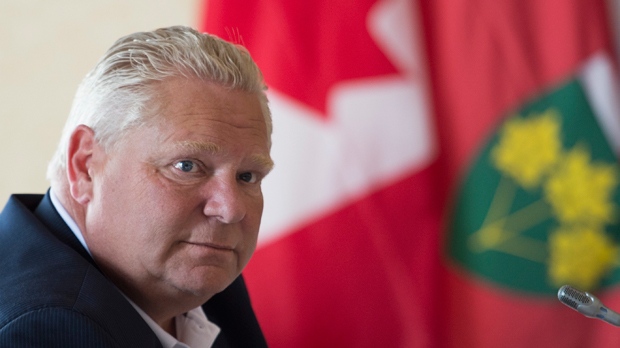 LUCAN, Ont. -- Ontario Premier Doug Ford is promising a more transparent process for provincial appointments following a patronage controversy that has plagued his government for weeks and resulted in the abrupt departure of his chief of staff.

Ford said his government will put a new appointment process in place to deliver that clarity but he would not commit to releasing internal reviews that are underway into the matter.

"We're putting a new process in place to make sure that everything is transparent, I look forward to doing that," Ford said Tuesday.

Ford's chief of staff, Dean French, suddenly left his job last month when it first emerged that people given lucrative foreign postings were connected to him.

In the weeks since his departure, more appointees forwarded by French have come under scrutiny and resigned after their links to him were revealed.

Ford revoked the agents-general appointments in London and New York City of Taylor Shields and Tyler Albrecht shortly after Shields was reported to be related to French and it emerged that Albrecht played lacrosse with French's son.

Four days later, Katherine Pal resigned from the Public Accountants Council after the NDP noted that she is a niece of French's wife.

The head of a committee that helps appoint justices of the peace, Andrew Suboch, stepped down after a report emerged that he had ties to the premier's former chief of staff.

Ian Neita, a board member for the Workplace Safety Insurance Board appointed in December, submitted his resignation earlier this month after the NDP revealed that in 2013 he helped coach a Toronto girls' basketball team with French.

Ford's office has said staff are reviewing all pending appointments and the province's Treasury Board is probing the appointment process to strengthen conflict of interest screening.

The opposition parties, however, want Ford's review of appointments to be conducted externally.

"To trust Doug Ford to do any of this in the backrooms of his office is going to compound the problem because that's how we got here in first place," he said.

Green party Leader Mike Schreiner said the premier's office cannot be trusted to police itself. The results of any review must be opened up to public scrutiny, he added in a statement.

"Efforts by the government to keep either of these reviews under wraps suggest they are more concerned about quashing the scandal than fixing their mistakes," he said.

The premier, meanwhile, repeatedly tried to turn the page on the controversy Tuesday during a news conference in Lucan, Ont., dismissing the issue as something only reporters care about.

"It's becoming an old story," he said. "I just don't hear about that on the road. I hear about everything but that. You know something, we're moving forward."

The premier also said he has not spoken to French -- who was once one of his most trusted advisers -- in some time.

"I just want to wish Dean all the best," he said. "We're moving forward as a government and we're going to continue doing great things for the people of Ontario."