In an exclusive interview with CTV News Toronto, Ford said the situation will ultimately be "up to the people to decide."

Ford said he believes there’s a "double standard right across the board" in how the photographs and video of Trudeau are being received, suggesting his personal politics play a role.

"If it was a conservative, I think it would have been a different story."

Trudeau apologized Wednesday for wearing brownface makeup at a party in 2001, after TIME Magazine published a photo from the event. 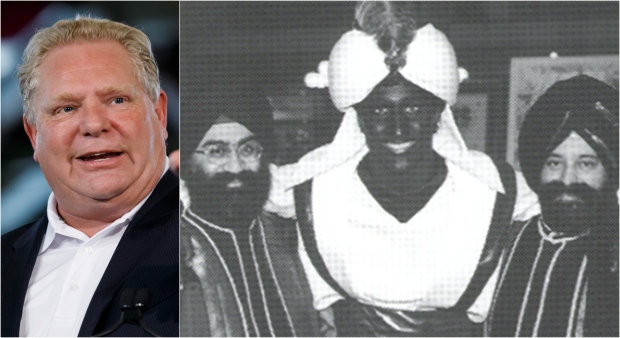 “I shouldn’t have done that. I should have known better but I didn’t and I’m really sorry,” Trudeau told reporters on the plane after a day of campaigning in Atlantic Canada.

TIME reported Wednesday that the photo appeared in the 2000-2001 yearbook of West Point Grey Academy, a private day school in Vancouver where Trudeau was a teacher at the time.

The photo was taken at the school’s annual dinner, which had an “Arabian Nights” theme, a Liberal Party spokesperson said.

Trudeau acknowledged that he was dressed as Aladdin.

"It was a dumb thing to do. I’m disappointed in myself. I’m pissed off at myself for having done it. I wish I hadn’t done it, but I did it and I apologize for it,” he said.

“I have worked all my life to try and create opportunities for people, to fight against racism and intolerance, and I can just stand here and say that I made a mistake when I was younger and I wish I hadn’t.”

Trudeau was nearly 30 years old when the photo was taken.