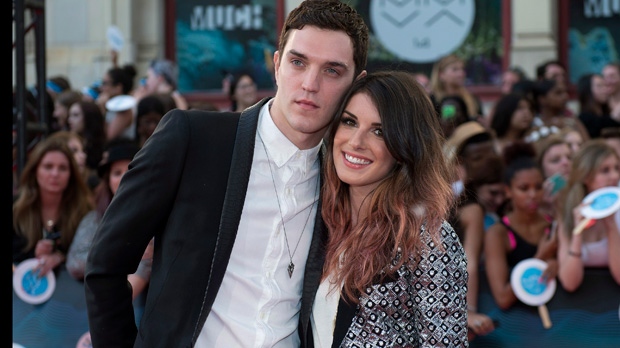 Shenae Grimes-Beech and Josh Beech arrive on the red carpet at the 2014 Much Music Video Awards in Toronto on Sunday June 15, 2014. THE CANADIAN PRESS/Nathan Denette

After launching her career on teen dramas "Degrassi: The Next Generation" and "90210," Toronto-born actor Shenae Grimes-Beech embraced the more mature role of Jacqueline Cooper on CTV's new police series "The Detail."

"I've literally never even played a grown-up, really," she said in an on-set interview.

Interviewed last July on the Toronto set, Grimes-Beech said the show is about "three generations of women who are brilliantly balancing home life and work life without it even being talked about."

Her character is mentored by Griffin's Det. Stevie Hall. Their boss is Crewson's Staff Insp. Fiona Currie, head of a metropolitan homicide division or police "detail."

At 28, Grimes-Beech is the youngest of the trio and thrilled to be finally getting more adult roles.

"This is really the most bad-ass character I've ever gotten to play," said Grimes-Beech, who also had a string of family-friendly roles in TV movies.

She's grateful that the woman in charge of "The Detail," executive producer Ilana Frank, cast her in something "so different from anything I've ever played before."

Grimes-Beech was just 18 when she landed the role of transplanted Beverly Hills teen Annie Wilson on "90210." A decade later, she'd tell her younger self to "keep your chin up."

"The highs are so high and the lows are so low," she said of Hollywood stardom at a young age. "It plays games with your head. And then you've got perfect strangers sharing their opinions on social media, and that can destroy you."

She credits Lori Loughlin, who played her mom on "90210," for setting an example.

"She handles everything with such grace," said Grimes-Beech, who admired how Loughlin knew every crew member's name and treated all on set with respect.

Crewson provides a similar example on "The Detail."

"She's incredible," Cubitt said of Crewson. "She's on set before anybody else and is the nicest, most positive person all the time."

At 61, Crewson has worked opposite the likes of Harrison Ford, Tim Allen and Arnold Schwarzenegger. She did a season of "24" and more recently got bloodied on the Northern Ontario-set "Slasher" series.

Born in Hamilton and raised in Winnipeg, Crewson was Frank's one-and-only choice to play the role of Fiona. The actor jumped at the chance to play "a woman my age" who has risen to the top "in a man's world."

"This is really three women with big lives and big jobs," she said. "How does your home life not come into the police station? It's very much a working woman's story."

As for Grimes-Beech, Crewson said she required no mentoring.

"You can tell she's well-schooled, she's a terrific actress," said Crewson. "So mature-she's really got her game together."

The feeling is mutual. Grimes-Beech said she and Griffin both "look up to Wendy and everybody just sings her praises. She's been in the game so long and is just killing it."