COVID-19 cases in Ontario remain above 2,000 for fourth straight day 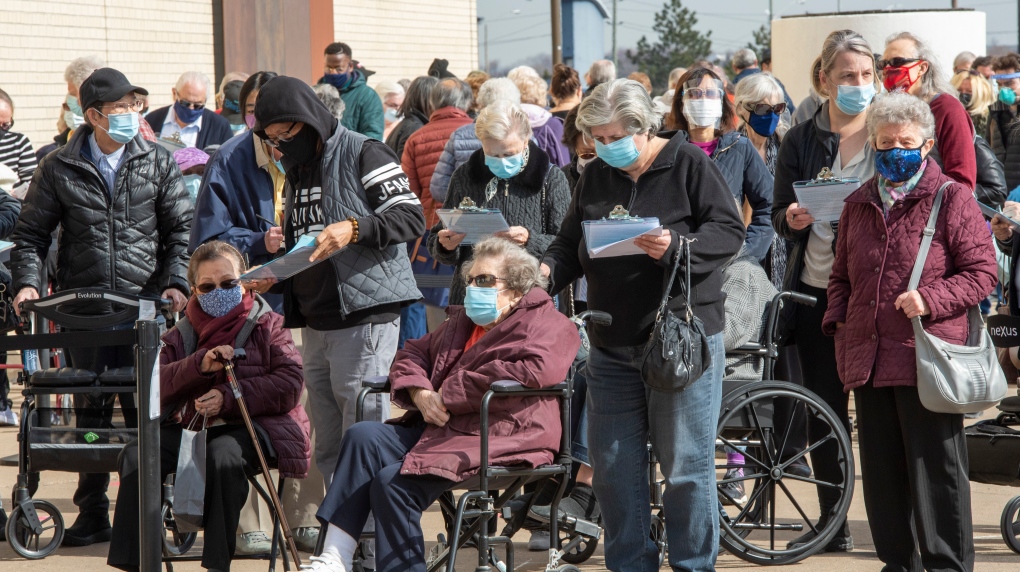 Vaccine clinic visitors fill in paperwork as they wait in line at a mass vaccination clinic in Toronto on Tuesday, March 23, 2021. THE CANADIAN PRESS/Frank Gunn

TORONTO -- Health officials in Ontario are again reporting more than 2,400 COVID-19 infections marking the fourth consecutive day in which case numbers have climbed above the 2,000 mark.

Sunday’s report of 2,448 cases marks a marginal decrease from the 2,453 cases logged on Saturday. The province added 2,169 cases on Friday and 2,380 on Thursday, though 280 of those infections were recorded due to a “data catch-up process.”

At least 19 of those deaths were logged in the last 24 hours.

With 50,227 tests processed in the previous day, Ontario’s COVID-19 positivity rate stands at 4.5 per cent, according to the government.

The seven-day average for number of cases reported in Ontario is 2,037. That number is up from the 1,538 reported a week ago today.

Toronto and Peel Region are currently operating in the grey zone, the strictest level of the province’s colour-coded framework, while York and Durham regions are in the less restrictive red zone.

Hospitalizations for COVID-19 dropped from a nearly two-month high of 985 in the past 24 hours. Right now, there are 917 patients in hospital with COVID-19. Of those patients, 366 are in the ICU and 217 are on a ventilator.

Six more cases of P.1 (Brazilian variant) were also logged, which brings the case total for that strain to 67.

The total number of B.1.351 (South African) infections remains unchanged at 63.

More than 18,000 swabs have tested positive for a COVID-19 mutation but have not yet been linked to a known variant of concern.

The province administered 64,950 doses of a COVID-19 vaccine on Saturday.

Nearly 310,000 people have received both their first and second shots and are considered to be fully vaccinated by the Ministry of Health.

Since inoculations began in December, the province says it has administered 1,981,282 doses.