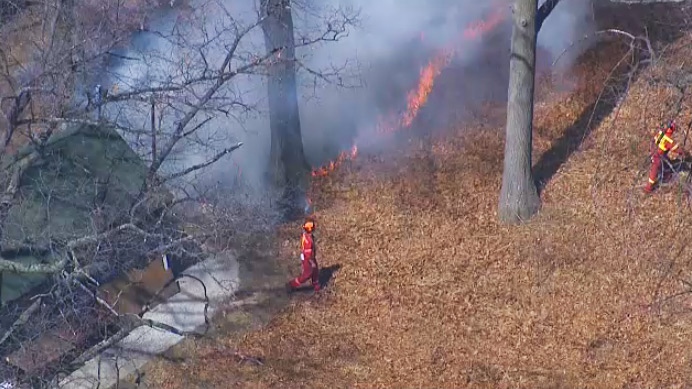 Experts monitor a controlled fire at High Park in Toronto on Wednesday, April 15, 2015.

The City of Toronto warned park-goers to avoid sections of two of the city's parks as crews lit fires on Wednesday.

The city's parks, forestry and recreation division has contracted Lands and Forest Consulting to burn parts of the park as part of a plan to protect a rare tree that grows in the parks.

Prescribed burns have been used for 15 years as a way to help sustain the city's black oaks, which are at risk of extinction across North America.

According to a statement issued by the city on Thursday, the burns are carefully controlled and low to the ground. The small fires consume dried leaves, small twigs and grass stems, but don't harm the larger trees.

"Fire is an important factor in a health oak savannah as it helps to encourage and invigorate native species," a statement on HighParkNature.org explains.

"Prairie plants including black oaks respond to modified site conditions following the burn, and grow more vigorously than they would have in the absence of fire."

The burns take place in mid-April every year, with the exact dates of the prescribed burns announced closer to the date, to coincide with ideal weather conditions. Fires are announced between 24 and 48 hours before they are set.

Ahead of the fire, park users were warned they could expect temporary road closures in High Park and restricted access along some of the off-leash dog trails.

Though the fires are small and low to the ground, the city warned that some smoke may reach residential areas near the parks. People with asthma and high sensitivity to poison ivy should limit their exposure by staying inside and keeping windows closed, the City of Toronto warned.

In the months after the fires, city staff, scientists, naturalists and volunteers will monitor the area, watching for signs of growth from the trees.