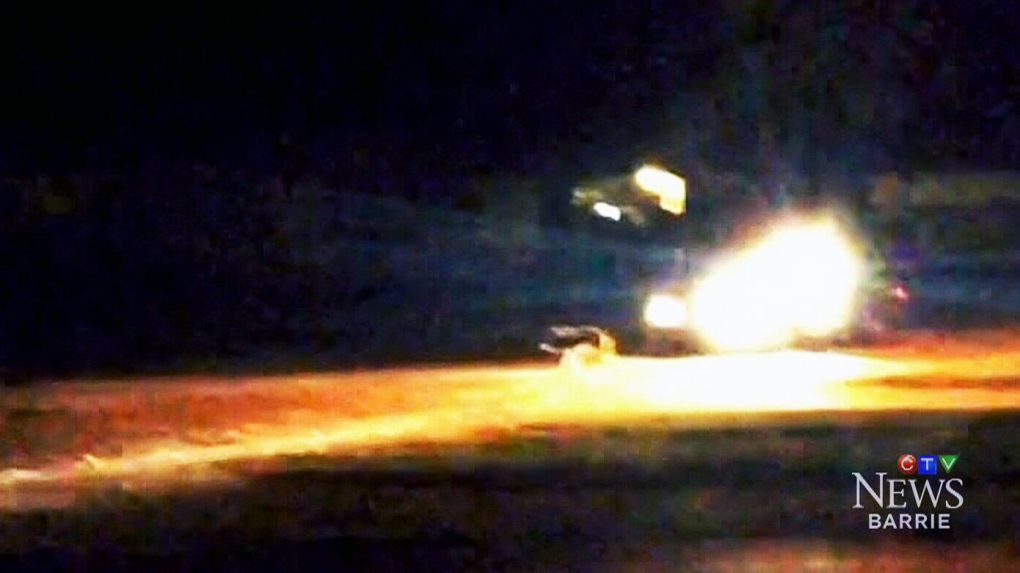 This screengrab from the video of the incident was posted on social media.

Residents in Collingwood, Ont., say they are outraged after a video emerged online of an Ontario Provincial Police cruiser repeatedly running over an apparent coyote that was wandering around the community.

Collingwood resident Kelly O’Neill said she and another resident saw the animal in the neighbourhood on Monday night.

Residents alerted authorities and O’Neill said she kept a lookout for the coyote until OPP arrived at the scene.

But instead of capturing the animal, O’Neill said the police cruiser ran over the animal multiple times as residents looked on. One of the officers then got out of the car and shot the coyote.

The incident was captured on video and quickly began circulating social media.

“That is ridiculous. Was there not something else they could have done?” asked one commenter.

“There (are) humane ways to put threatening animals down,” said another. “Running over one repeatedly doesn’t fit in that category.”

Animal may have been resident’s dog

While O’Neill and others thought the animal was a coyote, resident Scott Klinck said he thinks the animal in question was his dog.

“(My dog) looks like a coyote. She is 21-years-old,” he said. “Being blind and deaf, she doesn't respond too well to anything really, so I can see how they mixed the dog up with a coyote because she looks like one. But I think running her over was a bit inhumane.”

In a statement released Tuesday, the OPP said they aware of the video and are investigating the incident.

The OPP “remain committed to destruction of wildlife that is an imminent threat to public safety,” the statement said.

But wildlife protection groups are calling for an animal cruelty investigation into the incident.

“We didn’t want to think this was real when it was sent to us, but it is irrefutable at this point,” said Michael Howie, spokesperson for the Association for the Protection of Fur-bearing Animals.

The Vancouver-based organization is asking that the Ontario SPCA and the OPP work together to conduct an animal cruelty investigation.

“This was not an accident or an aberration,” Howie added in a statement. “This was a choice made by an individual who, as an officer of the Ontario Provincial Police, has significant training in tactical use of force.”

Collingwood animal control officials still have the animal’s remains. They have not confirmed whether the animal was a dog or a coyote.

With a report from CTV Barrie