TORONTO -- Police were called to Ontario Premier Doug Ford’s constituency office in Etobicoke Sunday morning after climate activists dumped a pile of manure in front of the building.

Two men can be seen, in a video posted on social media, inside the back of a pickup truck shovelling manure from the trunk onto the ground in front of the office on 823 Albion Road.

The group responsible, which calls themselves Extinction Rebellion, wrote in a news release that the action was to protest against the province’s climate action program. 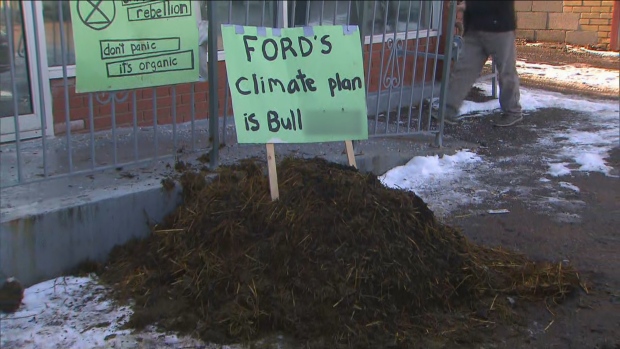 Police said they are aware of the incident and units were sent to investigate.

It is not clear if any charges will be laid.

The Office of the Premier of Ontario wrote in a statement Sunday morning that Ford would not respond to the incident.

"We wish them a Merry Christmas, Happy Holidays and hope they have a more productive and joyous time with their families."

Extinction Rebellion (XR) has brought the climate emergency to the constituency office of Premier Doug Ford, in response to Ontario’s Auditor General ...