Hydro One says it will take “several days” to repair hydro lines that were damaged after an upright crane in the lake slammed into them and caused a massive power outage downtown on Thursday.

The outage occurred in the city’s financial district at around 12:30 p.m., leaving approximately 10,000 customers without power at its peak.

A portion of the Eaton Centre was left in the dark, forcing hundreds of stores to temporarily close. The outage also knocked out power in parts of the Hospital for Sick Children's campus.

Traffic lights were down in some intersections causing heavy traffic and significant streetcar delays. However, the outage did not affect subways.

Toronto Fire said crews responded to a number of elevator rescues, but no injuries connected to the outage were reported yesterday.

Hydro One says the outage was caused when a barge moving an upright crane in the Port Lands area hit overhead high voltage transmission lines.

“Now, what happened when that crane hit the line resulted in a downstream effect where a surge of power affected a nearby station on the Esplanade that we were actually using to reroute power to Toronto Hydro,” Hydro One Spokesperson Tiziana Baccega Rosa told CP24 Friday morning.

The City of Toronto says the barge was being operated by a subcontractor to Southland-Astaldi Joint Venture (SAJV), which is a contractor for the Ashbridges Bay Treatment Plant outfall project.

Crews were reportedly preparing to move equipment into the lake for the project when the incident occurred.

“We're going to use stone that needs to be placed out in the lake and the subcontractors were going to do that work for us but they were moving equipment. The event occurred off-site while they were doing their preparatory work,” Lou Di Gironimo, Toronto Water’s general manager told CP24 Friday. 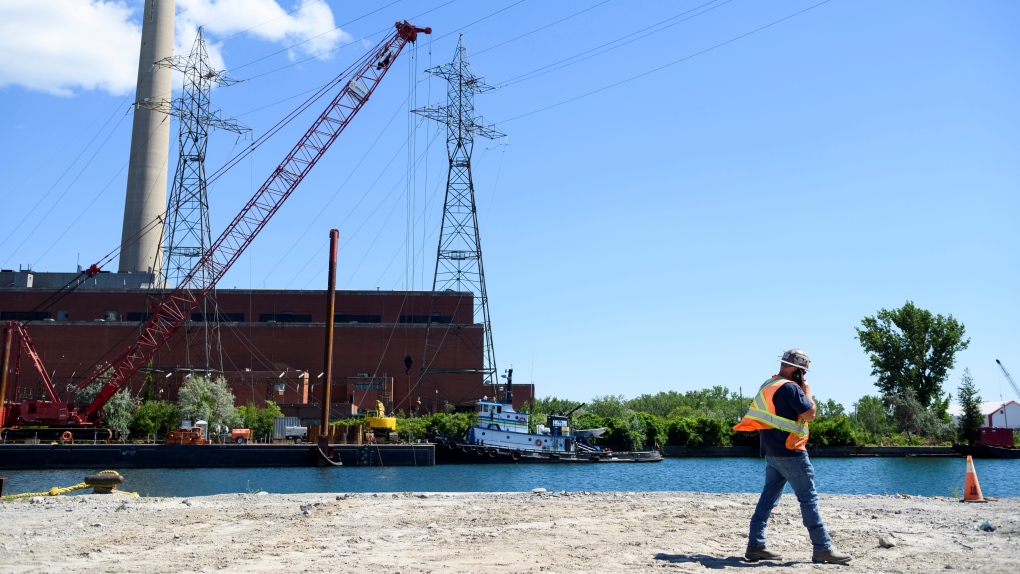 Emergency workers monitor the site of a collision between a barge carrying a crane and power lines are photographed in Toronto, on Thursday, August 11, 2022. THE CANADIAN PRESS/Christopher Katsarov

Baccega Rosa said Hydro One crews were able to reroute about 50 per cent of the power shortly after the incident, which resulted in power being restored in some areas quicker than others.

Crews then had to stop their efforts and wait for the fire department to clear the site for workers to safely enter and reroute the rest of the power. 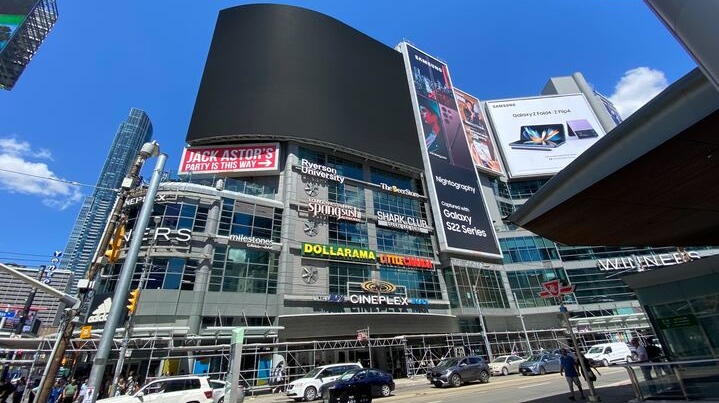 A darkened video board is shown at Yonge-Dundas Square on Thursday during a massive power outage. (Mike Campoli)

Once crews gained access, they were able to reroute all power to Toronto Hydro and power was fully restored downtown by 8 p.m.

Baccega Rosa said there are established safety protocols to stay a minimum of 10 metres away from power lines, which were not followed yesterday.

“And that's (for) anyone whether, you know, you’re a barge passing under them (power lines) or if you're doing work around your house and you need to trim the tree branches around the line connecting your home. You know, everyone was very lucky yesterday that there was not a safety incident and no one was hurt as a result of this,” she said.

The city has launched an investigation into the incident and has requested a full report from SAJV to understand what happened.

“So the big thing that we're going to look at is what happened? Who was in charge of the subcontractor work? What were the safety procedures in place at the time? And then what exactly happened when the crane hit the wires?,” Di Gironimo said.

Di Gironimo could not confirm if the subcontractors will face any consequences for the incident.

“That will be part of the investigation to find out what happened. What were those precautions that were supposed to be in place. What was followed? What wasn't?”

He said the city is meeting with SAJV next week and plans to complete the investigation within a matter of weeks.

A child welfare worker is telling a coroner's inquest that had she known an Indigenous teen in her care had a history of suicidal thoughts and self-harm, she would have tried to talk to him about it.