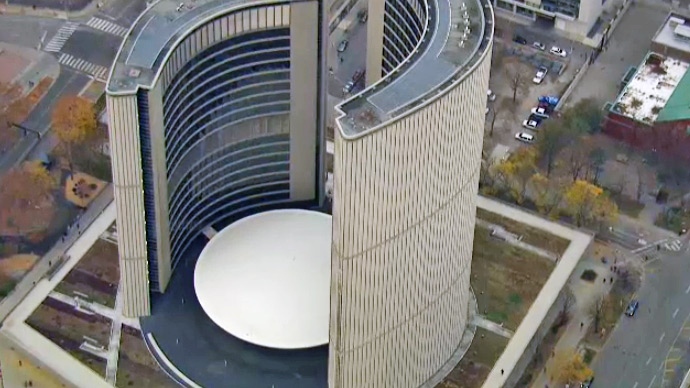 TORONTO -- The decision to reduce the size of Toronto council in the middle of a municipal election is "discriminatory and arbitrary" and violates the Constitution, city lawyers argue in court filings ahead of a Friday hearing on the controversial law passed by Ontario's Progressive Conservative government.

The documents, filed with Ontario's Superior Court, say that Bill 5 -- the so-called Better Local Government Act -- interferes with the democratic rights of city residents by imposing the change in the middle of an election period.

The legislation, which passed earlier this month, reduces Toronto council to 25 seats from 47 to align the city's ward map with federal ridings in time for the Oct. 22 municipal election, a move Premier Doug Ford has argued will improve decision-making and save $25 million.

Lawyers for the city say the law will only hurt Toronto, urging the court to strike it down and let the city clerk continue with the previously planned election.

"The interference in the electoral process, once underway, constitutes a breach of ... the Charter," the lawyers say in the court documents. "The treatment of the City and its residents pursuant to the Act is discriminatory and arbitrary."

They argue that Toronto began an extensive ward boundary consultation in 2013 that resulted in the addition of three new wards. That decision, they say, was upheld during a challenge at the Ontario Municipal Board and in divisional court.

"Dividing the City into 25 wards creates ward sizes that are significantly larger than ward sizes of any other municipality in Ontario," they say. "Such a redistribution of wards does not provide for effective representation now or in the future."

Toronto's challenge along with two others brought against the provincial government over the decision to shrink city council cut will be heard Friday morning.

Earlier this month, Toronto District School Board trustees voted to support the city's challenge and have been named an intervener in the court challenge. The board's boundaries will also be forced to realign under the new law.

Toronto Mayor John Tory has criticized Bill 5, saying it is "unacceptable and unfair to change the rules in the middle of an election."

Jessica Trepanier, a spokeswoman for Attorney General Caroline Mulroney, said the province plans to file its materials with the court Wednesday afternoon.

"As the matter is before the courts, it would be inappropriate to comment further at this time," she said in a statement.

The provincial legislation also cancels planned elections for the head of council position in the regional municipalities of Muskoka, Peel, York and Niagara, turning them into appointed roles.

Ford, a failed Toronto mayoral candidate and one-term city councillor, has said he has wanted to make the change since his days at city hall despite not mentioning his plan during the spring election. He has repeatedly called Toronto city council "dysfunctional" and said its size has hindered the approval of major transit or infrastructure projects.