TORONTO -- Police have charged the alleged driver of a Mustang seen doing numerous loud, rubber-steaming donuts at the intersection of Yonge and Dundas streets on Monday night.

An Instagram video posted on Tuesday night shows a black Ford Mustang squealing around the pavement, as several people approach from the sidewalks to take close-up video.

The car does several revolutions before a police cruiser is seen speeding south on Yonge toward the intersection, prompting the driver of the Mustang to head south on Yonge.

“Officers became aware of a man performing “donuts” and a short pursuit did take place,” she said. 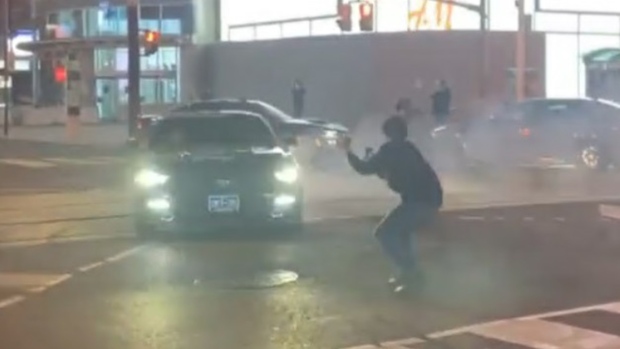 A black vehicle was seen in the video blocking the northbound lanes of Yonge Street at Dundas.

He has been charged with dangerous operation of a conveyance, mischief endangering life, flight while pursued by a peace officer, drive motor vehicle on a highway while performing a stunt, and careless driving.

Baluch is scheduled to appear in court on April 23.

Anyone with information is asked to call 52 Division.