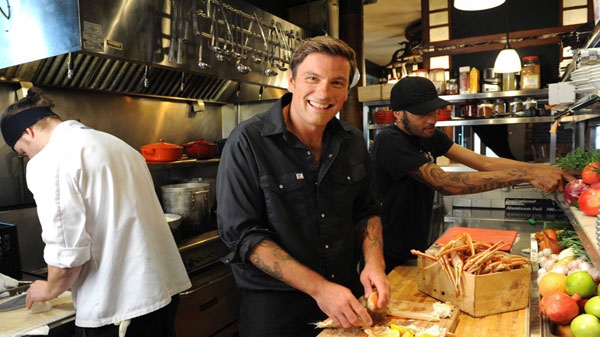 The easygoing chef, whose cooking show "Chuck's Day Off" is set at his first restaurant, Garde Manger, says his TV appearances have brought him a sizable fanbase in Canada's most populous city.

"Toronto would be a great move," Hughes says during a recent visit to promote his upcoming appearance on "The Next Iron Chef: Super Chefs."

"I'm seriously thinking about it more and more. Why? I think this city needs a little Garde Manger."

Hughes notes that he launched his first restaurant with two partners who have strong ties to Toronto -- former "Instant Star" actor Tim Rozon, who often works in the city, and Kyle Marshall, who is from Toronto.

"The way our lives are going right now, it would make a lot more sense to come here," says Hughes, who returns to Toronto on Nov. 26 for a cancer benefit with "Iron Chef" Bobby Flay and several Canadian celebrity chefs including David Rocco, Lynn Crawford and Mark McEwan.

"Most of our fanbase is in Toronto and a lot of (my partners') time is spent here.... Toronto would make a lot of sense. I'm not here yet, but I'm thinking."

Hughes and his partners opened a second Montreal restaurant, Le Bremner, in August. Hughes says it was largely because the 50-seat Garde Manger had a problem most restaurateurs would kill for -- too many customers.

"We refuse a lot of people at the restaurant, plain and simple. At one point, after somebody's called five times and I've refused them five times it doesn't make me feel good about myself and it's never why I got into the restaurant business, never," he says.

Hughes says his appearance earlier this year on "Iron Chef America" -- when he beat Flay in a lobster battle that saw him prepare lobster poutine -- has transformed his career. Now when he makes public appearances, he says he's always introduced as "'Iron Chef'-winner Chuck Hughes."

"It's created a real big media buzz and the fact is that 'Iron Chef' is watched by everybody -- not just foodies or people who love food," he says.

"That one hour has taken over my life. It's great but it comes with a lot of pressure.... There's that pressure to succeed and be at that level. I guess it keeps me on my toes."

"It's been all positive, it's just, sometimes I struggle with it.... I've been doing a lot of things for the past 17 years and that one hour is really what people know."

Still, Hughes says he was honoured to be invited to "The Next Iron Chef," where he will compete against culinary stars including Anne Burrell, Michael Chiarello, Alex Guarnaschelli, Robert Irvine and Marcus Samuelsson for a chance to join the chairman's team on "Iron Chef America."

"When they called I just felt like I already won," says Hughes, describing the experience as "summer camp for adults with major stress."

"It's not just another show, you know what I mean? It's big."

The series comes as Hughes notes he's juggling several other projects: a Christmas special is due this holiday season called "Chuckmas" and he acknowledges that a new cooking show is in the works for the Food Network, but won't divulge details.

Hughes says he never imagined that cooking comfort food would lead to a TV career, but admits that he was never really shy about playing to an audience.

"If you ask my mom, I've always kind of been looking at myself in the mirror. That's kind of like my big thing growing up," he says laughing.

"So I guess maybe I was practising."

"The Next Iron Chef: Super Chefs" begins Monday on Food Network Canada. Food Network is offering a free preview to more than 10 million additional households across the country.