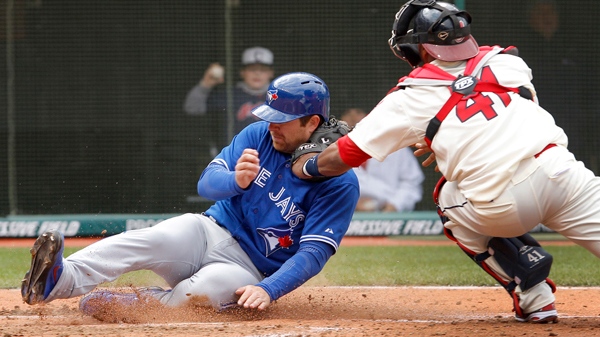 CLEVELAND - The Cleveland Indians' first win of the season wasn't exactly a piece of cake. Still, it was worth celebrating.

"Let's tell him it's his birthday every day," said Cleveland closer Chris Perez, who retired Toronto slugger Jose Bautista on an infield popup with the bases loaded to earn the save.

"I wouldn't mind if it was my birthday every day, but I would be an old man if that happened," Santana said.

Santana opened the second inning with a drive over the wall in centre. He connected a second time off Joel Carreno (0-1) in the fifth, a two-run shot to right that broke a 2-all tie.

On his last four birthdays, including two years in the minors, Santana is 10 for 17 with five homers and 13 RBIs.

"I don't know why, maybe I am just excited," Santana said.

Toronto won the first two games by 7-4 scores. The first went 16 innings, the longest opening-day game in history, and the second game lasted 12 innings. The Indians led in all three games. This time, their bullpen did not allow the Blue Jays to go ahead.

Joe Smith replaced Lowe to start the eighth and yielded three consecutive one-out singles and a run. Adam Lind's RBI single made it 4-3.

Vinnie Pestano came on and struck out Edwin Encarnacion and Lawrie to end the threat.

"That was huge," Indians manager Manny Acta said. "He made some very big pitches there."

Perez then closed it out to make Lowe a winner.

Lowe (1-0) got 15 outs on grounders and allowed two unearned runs in his Indians debut. Encarnacion had an RBI double and Brett Lawrie a sacrifice fly as Toronto tied it at 2 in the fourth.

"Lowe was fantastic," Acta said. "He gave us a good solid start. Then Perez really made some tough pitches for the save. Our defence tried to get us in trouble, gave us a bit of a scare there.

"It's a funny game. You blow one when up by three, then save one against one of the best hitters in the game."

Perez, who gave up three runs in the ninth inning on opening day, survived a critical error by shortstop Asdrubal Cabrera on a potential game-ending double play grounder. The miscue put runners on first and second with one out.

"That was a rarity," Perez said. "It could have been over. He's not going to do that very often. He's (usually) going to pick me up, making diving plays."

Perez came back to strike out Yunel Escobar, but walked Kelly Johnson. That brought up Bautista, who led the majors in homers with 54 and 43 the past two years and was 5 of 9 with a homer off Perez.

"Facing him with the game on the line, that's not exactly what I wanted," Perez said. "That's why I play the game. It's a lot of fun."

"Anytime you have Jose Bautista at the plate with the tying run on third, we'll sign up for that opportunity each and every game," Farrell said. "We chipped away and battled back to be one swing away."

Bautista thought it was a good pitch to hit.

"It was a fastball," Bautista said. "It was very hittable. I was a little early on it, just a tad bit ahead of it."

It was the third straight strong start by the Indians' rotation. Cleveland starters compiled a 1.23 ERA in the series.

Lowe, in his 16th season, allowed five hits and had one walk and one strikeout. The 38-year-old right-hander showed no ill effects of some tightness in his right ribcage that caused him to leave an exhibition start on March 29.

Acquired from Atlanta this off-season, Lowe made his first appearance at Progressive Field since May 2004, for Boston. He spent the past seven years in the National League.

Carreno, making his first career start, gave up six hits and walked four over six innings. The right-hander had worked 11 times in relief a year ago for the Blue Jays. Afterward, the Blue Jays optioned Carreno to Triple-A Las Vegas and recalled LHP Aaron Laffey. Toronto doesn't need a fifth starter until April 21.