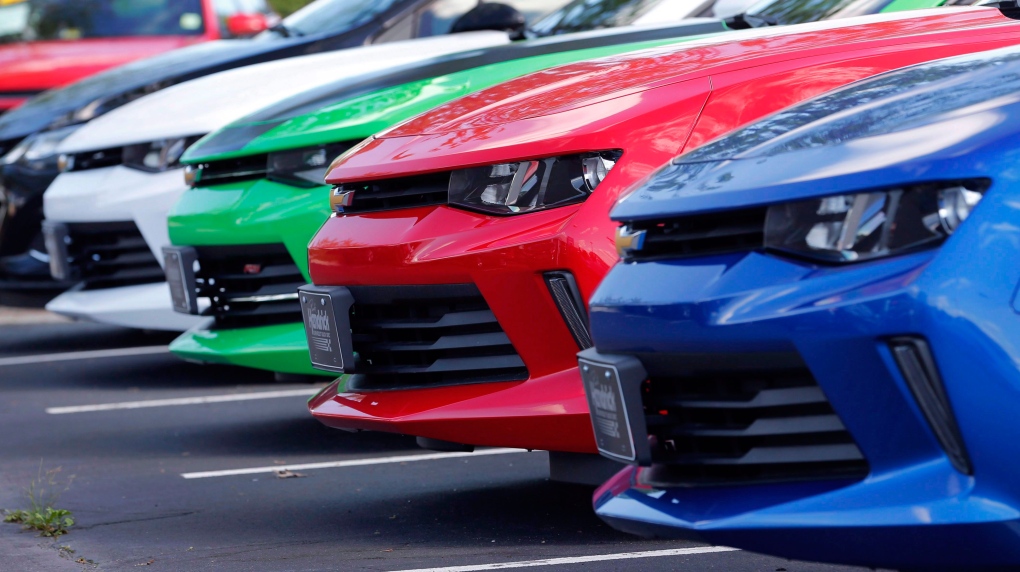 In this Wednesday, April 26, 2017, photo, cars are lined up in the lot of a Chevrolet dealership in Richmond, Va. THE CANADIAN PRESS/AP-Steve Helber

TORONTO -- Canadian sales of cars and light trucks were down 0.6 per cent in March compared with the same month last year but remained high by historical trends, according to industry statistics compiled by DesRosiers Automotive Consultants.

General Motors performed relatively well compared with the other Detroit-based manufacturers, selling 30,159 vehicles under various name plates, a slight increase of 0.1 per cent from March 2017.

But sales of Toyota-branded vehicles was up 9.7 per cent to 18,954, and sales of European brands Volvo, Volkswagen and its luxury affiliate Audi were up by double-digits from smaller bases.

General Motors announced early Tuesday that it would stop announcing its sales figures on a monthly basis and begin issuing them quarterly starting with the months of April through June.

Dennis DesRosiers, whose company compiles the Canadian sales figures, said in an email that he'd prefer to see them released on a monthly basis.

"Sales is arguably the most important performance metric so there are a lot of companies that will be quite upset if they don't at least continue reporting privately to each of the other companies," DesRosiers said.

"One in seven jobs in Canada and one in six in Ontario are dependant directly or indirectly on the automotive industry, so isn't it somewhat important to have regular reporting of the most important metric in the industry?"

Representatives of Ford Canada and Fiat Chrysler said in emails that they haven't changed their policy on releasing figures on a monthly basis.

March was the first month of 2018 to show a year-over-year decline in overall sales, according to figures compiled by the consulting group, which is based in Richmond Hill, Ont.

The first-quarter total was 429,258 vehicles light trucks and cars sold, up 1.8 per cent from the comparable period last year.

Light trucks accounted for nearly three-quarters of the vehicles sold during the three-month period, rising 6.4 per cent from a year ago to 308,072. Car sales were down 8.2 per cent to 121,186, DesRosiers reports.