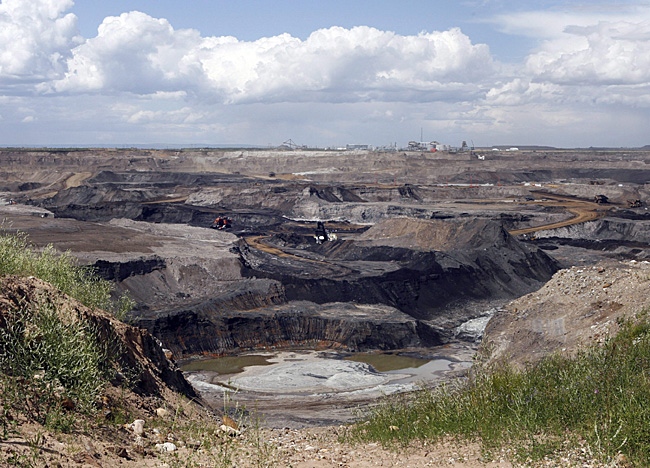 A portion of the Shell Albian Sands oilsands mine is seen from an overlook near Fort McMurray, Alta., Wednesday, July 9, 2008. (THE CANADIAN PRESS/Jeff McIntosh)

British environmental writer George Monbiot vowed two years ago to stop flying, but he told a Toronto audience that he broke the pledge partly because Canadians need to be told their nation's reputation is suffering over the handling of the climate issue.

"I've got to say some hard truths ... Canada has been earning a very bad name for itself," he said Saturday.

Bad climate policy is causing the same damage to Canada's reputation that whaling is doing to Japan's or the policies of George Bush did to the United States, he said.

There are two big reasons for that, said the author of the 2006 book Heat: How To Stop The Planet From Burning:

Andrew Nikiforuk, the Alberta-based author of the 2008 book Tar Sands: Dirty Oil and the Future of a Continent, has said the oil companies want to make the tar sands "the next Saudi Arabia." And in some ways, Canada is emulating the powerful Middle Eastern nation.

The Climate Change Performance Index, a project of Germanwatch and Climate Action Network Europe, ranked 57 countries on their climate policies. Canada was clustered near the very bottom with Australia, the United States and Saudi Arabia.

The first index, released in 2006, had Canada in 46th place, still very poor. But we've gotten worse each succeeding year.

The next rankings are to be released Dec. 10, but don't expect Canada to suddenly surge. Monbiot said Canada has been seen as systematically sabotaging the talks leading up to the United Nations Climate Conference that starts Dec. 7 in Copenhagen.

On Friday, U.N. Secretary General Ban Ki-Moon urged Canada to set an ambitious mid-term target, especially since it will be hosting the G8 and G20 talks this coming summer.

On Saturday at the Commonwealth Heads of Government summit in Trinidad, Harper said this: "I notice that the U.N. secretary-general made particular praiseworthy note of targets that President Obama has laid out. Those targets are of course completely in line with the government of Canada's policy."

Again, Canada and the U.S. are clustered near the very bottom of the climate policy ratings.

The Harper government's policy of a 20 per cent cut from 2006 levels by 2020 is substantially weaker than this country's Kyoto target of a six per cent cut below 1990 levels by 2012. Most climate analysts say there's no way the Tories' 2007 plan will deliver.

That plan doesn't require industrial emitters to start cutting until 2010. It also only requires them to reduce emissions per unit of output, so if output rises enough, one could still see a rise in total emissions. Tar sands output is expected to quadruple by 2020.

Monbiot told ctvtoronto.ca that the Harper government's policies are very similar to the climate approach of the former Bush administration - "and I think it's doing a similar amount of damage to Canada's reputation."

For example, Harper has said Canada won't sign a deal that doesn't have all major emitters signing up for cuts - which is one excuse Bush gave for brushing off Kyoto in 2001.

India and China, whose emissions are rising but are still a fraction of Canada's on a per capita basis, have indicated they will take some steps to curb their carbon output. It remains to be seen how Canada responds in Copenhagen.

Monbiot said now is a time for statesmanship on the climate file. While he praised Canadians as among the most delightful people he's ever met, "every so often, you let a bunch of rampaging Neanderthals take over," he told the crowd.

The political base of the Harper Conservatives lies in Alberta and Saskatchewan, two provinces that benefited greatly from the oil boom that lasted from about 2002 to 2008.

Unfortunately, to keep the world's average temperatures from rising by more than two degrees Celsius from pre-industrial levels, which is the amount of global warming that can be absorbed without getting into truly dangerous climate change, carbon emissions must fall dramatically.

Canada is already one of the world's top per-capita carbon polluters, and that will only get worse as massive development of the tar sands takes place (the recession put a temporary damper on expansion plans).

Tar sands oil is considered three to five times "dirtier" than conventional crude because vast quantities of natural gas are burned to separate the bitumen from the sand.

The Progressive Conservative government of Alberta, backed by the federal government, sees salvation in the capture and storage of carbon emissions - something Monbiot called the most expensive solution to cut carbon emissions.

However, a recent report prepared for the Pembina Institute and the David Suzuki Foundation by environmental economist Mark Jaccard found capture and storage could be part of the mix for modest oil sands expansion - if part of an overall aggressive, economy-wide campaign to reduce emissions. Such a strategy would include a massive boost in renewable energy, such as wind and solar.

Monbiot puts the problem this way: To cap the amount of carbon dioxide in the atmosphere at 450 parts per million and to keep the rise to 2 C, humanity can release up to 60 per cent of the world's current carbon energy reserves into the atmosphere between now and the year 2500. It's currently on course to burn that much by 2050, he said.

That means choices must be made about the fuels people will use, which means avoiding the dirtiest ones. The cheapest solution to the carbon emissions problem is "to leave fossil fuels in the ground," he said.

Global warming is happening, and rich, temperate countries such as Canada will be hurt least and latest, Monbiot said. In poor regions of the globe such as the Sahel, South and Southeast Asia and the Magreb, the effects are being felt now, he said.

Ignoring the rising toll that climate change will take on the world's poorest and most vulnerable would be the act of a psychopath. "We must not let psychopaths take over the asylum," he said.

Monbiot told ctvtoronto.ca that he wasn't calling individual government members psychopaths, but "disregard for the other people of the world is inherently psychopathic."

The Canadian government should act on behalf of all people, and "not just its immediate factional interests," he said.

CTV's Roger Smith reported Saturday from the Commonwealth Summit there had been rumours that Canada resisted a strong statement on a multi-billion-dollar climate change fund, which is meant to help nations particularly vulnerable to climate change. But it did sign the declaration calling for a binding international climate deal.

Since taking power in early 2006, the Harper government has repeatedly said it won't hurt the economy at the expense of the environment.

"Canada is not a struggling Third World country. Canada is a very rich, sophisticated country," Monbiot said. "It doesn't have to depend on the tar sands."

Monbiot will be appearing Tuesday at the Munk Debates in Toronto. The topic: "Be it resolved climate change is mankind's defining crisis, and demands a commensurate response."

Green Party Leader Elizabeth May will join Monbiot in arguing the case for the resolution. On the against side will be Danish academic Bjorn Lomborg, author of The Skeptical Environmentalist and Nigel Lawson, a former cabinet minister under British Tory prime minister Margaret Thatcher and author of An Appeal To Reason: A Cool Look at Global Warming.