Boy, 9, with autism not allowed to bring service dog to class, tribunal rules 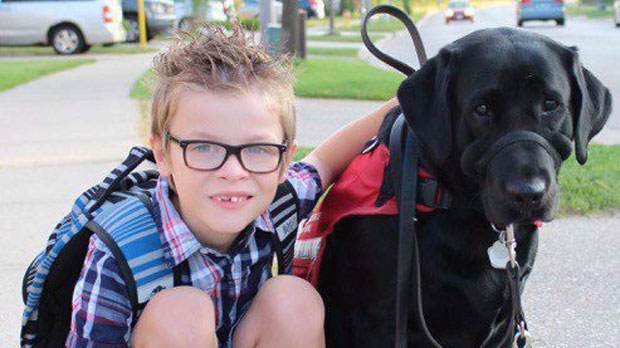 Kenner Fee poses with his service dog Ivy in an undated handout photo. Ontario's human rights tribunal has ruled that Kenner, a nine-year-old autistic boy, cannot bring his service dog with him into his classroom. THE CANADIAN PRESS/HO - Craig Fee

TORONTO -- Ontario's human rights tribunal has ruled that a nine-year-old autistic boy can't bring his service dog with him into class.

The decision says Kenner Fee's family failed to prove that having his black Labrador Ivy in the classroom would help him with his education.

Adjudicator and tribunal vice-chair Laurie Letheren found that the Waterloo Catholic District School Board took all necessary steps to evaluate whether the dog was needed in the classroom, and supported the board's decision not to allow the service animal to sit beside Kenner during lessons.

The tribunal heard from Kenner's family that his autism leaves him prone to agitation, emotional outbursts and even bolting from his surroundings, but that having Ivy beside him significantly helps regulate his behaviour.

Letheren accepted that evidence, but also accepted testimony from school board staff suggesting Kenner was performing well in class without Ivy, and that any problems he was encountering would not necessarily be addressed by the dog's presence.

Fee's lawyer Laura McKeen says the family is crushed by the decision and is considering their next steps, including Kenner's future education plans. She says the Fees have the right to appeal the ruling, but have not yet decided if they will do so.

"They truly believe that Kenner's service animal Ivy is essential to his entire life, including and specifically his education," she said. "The Fees are devastated by the impact that decision is going to have on Kenner going forward."

The Waterloo Catholic District School Board did not comment specifically on the decision other than to acknowledge the outcome in their favour.

"We work alongside families to make student-centred, individualized decisions that we collectively believe will allow them to flourish," Director of Education Loretta Notten said in a statement. "Student success is of paramount importance to us and we strive to bring each one to their fullest potential."

The Aug. 30 tribunal decision chronicles a fight Kenner's family began in April 2014 to get Ivy into the boy's class, something that has not been allowed to date.

The tribunal heard that Kenner had been matched with Ivy after training with the Lions Foundation of Canada Dog Guides, an internationally accredited school that provides service dogs to address a range of disabilities.

Kenner's father, Craig Fee, told the tribunal that Ivy's presence had made a noticeable difference in Kenner's life and helped regulate his behaviour. When he sought permission to bring Ivy into Kenner's classroom, however, the request was denied.

Board employees told the tribunal there were concerns that Ivy would set Kenner back in his independence, adding that he may rely too much on the dog rather than working directly with staff and peers.

Kenner's father and various professionals working with Kenner told the tribunal the boy's anxiety got worse the longer he went without his service animal during school days.

The decision said that assertion was not supported by testimony from board staff, who said Kenner was largely compliant with instructions and generally functioning fairly well academically.

Behaviour tracking sheets submitted to the tribunal noted instances when Kenner allegedly tried to leave the school yard and even climb out a window, but a special education teacher downplayed the incidents in his testimony.

He said in both cases Kenner threatened to go through with an escape, but stopped upon being prompted by a teacher. The teacher also denied an incident noted in a behaviour tracking sheet indicating Kenner threw a chair, saying the student had never intentionally done anything to endanger himself or others.

The teacher testified that Kenner was not visibly upset in class, though he did tell the tribunal that Kenner would sometimes yell out for Ivy.

Letheren said that while having Ivy there would eliminate that issue, she said the dog "could not provide indicators about why the applicant may be feeling so stressed at school."

Letheren also went on to note that Kenner is prone to "exaggerating his situation" according to testimony from both his father and a teacher.

Letheren said the board had taken appropriate steps to put learning supports in place for Kenner and that Ivy's presence was not necessary.

"I find that the evidence demonstrates that the supports and strategies that the respondent has provided to accommodate his disability related needs are providing him the opportunity to realize (his) potential and develop into (a) highly skilled, knowledgeable, caring citizen who contribute 1/8s 3/8 to 1/8his 3/8 society," she wrote.

The ruling was met with shock and dismay by some members of the autism community.

Laura Kirby-McIntosh, Vice-President of the Ontario Autism Coalition, said the decision represents a setback for education in the province since school boards can apply provincial accessibility guidelines according to their own discretion.

"The injustice here is that whether or not service dogs enter a school is going to be completely left to the discretion of 72 different individual school boards. To me, your rights should not change depending on your postal code."

Currently, Ontario's education act does not treat schools as spaces that are open to the public, which is what permits boards to bar service animals from the premises if they wish.

Kirby-McIntosh said there's a pressing need for a province-wide education standard on all accessibility issues, including service animal access.