Bikers had no idea they were going to their deaths 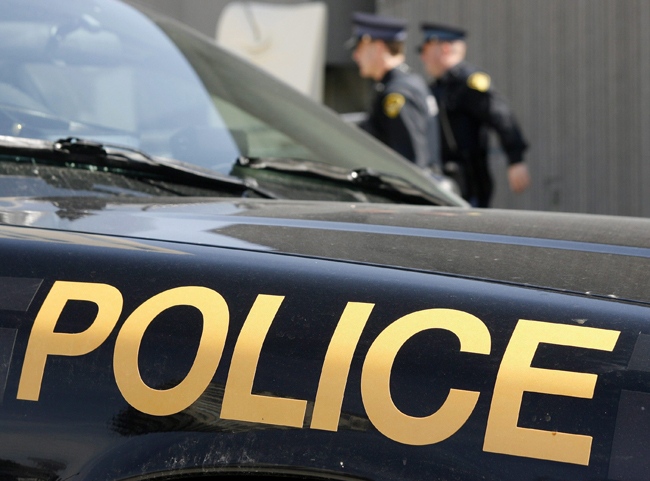 OPP Police officers on security detail walk past a cruiser outside the London, Ont. courthouse during the Bandidos biker trial on Thursday, April 2, 2009. (Dave Chidley / THE CANADIAN PRESS)

LONDON, Ont. - The eight bikers who were led one by one from a barn by their biker brother Wayne Kellestine had no idea they would be shot to death -- and neither did many of the six men accused in their deaths, a court heard Wednesday.

The first-degree murder trial heard Wednesday for the first time from one of the accused, Michael Sandham. He and several other of the accused are linked to the Bandidos biker gang's Winnipeg chapter.

The eight men later found dead and stuffed in vehicles in a field in April 2006 were the Toronto Bandidos chapter, which was at odds with Bandido officials in the United States.

Kellestine, a member of the Toronto chapter, was ordered to strip the rest of his gang members of their affiliation and rebuild the Bandidos in Canada with the Winnipeg chapter, which until then had probationary status, court has heard.

The night before, the Toronto men were summoned to Kellestine's farmhouse in southwestern Ontario. Although most of them would be systematically shot to death that night, the six accused didn't discuss any pre-arranged mass murder plan, Sandham, 40, testified.

"People are kicked out of the club all the time," he said, calling the club a "revolving door."

"It's not a violent situation."

In the weeks leading up to the slayings, Sandham, Dwight Mushey, Brett Gardiner and Marcelo Aravena travelled from Winnipeg to stay at Kellestine's in Ontario, along with a Winnipeg Bandido who is now an informant and can only be identified as MH. The sixth accused, Frank Mather, was already living at Kellestine's London, Ont.-area house, court heard.

Sandham testified one day he overheard Kellestine, Mushey and MH talking about "murdering" two of the Toronto men and "cutting them up into little pieces."

A former police officer, Sandham said he confronted Kellestine, who brushed it off as a joke.

"He has a very, very dark sense of humour," Sandham told court.

To illustrate his point Sandham described one time in the days leading up to the slaying of the eight men when some of the accused went for a walk in the woods and Kellestine put what appeared to be dried up deer feces in his mouth and chewed it.

Court has also heard testimony that Kellestine sang and danced amid the killings and that he had a Confederate flag, which he called the "most beautiful flag in the world."

But the night in question, with the eight men in Kellestine's barn with Kellestine, and the other accused armed and hiding around the barn and surrounding property, Sandham overheard some of the Toronto men talking about killing him.

"It was at that point I knew Wayne wasn't kidding," he said.

Sandham, who was also in the military for three years, broke down weeping on the stand -- for the first of what would be many times during his testimony -- as he discussed his fear for his life.

"I started to think about my daughter," he said, noting earlier in testimony that he "technically" has four children, though he didn't elaborate.

"I thought I was going to get killed...that I might have to shoot somebody to get out of there."

When Sandham, Mushey and MH popped out of their hiding places, one of the Toronto men, Raposo, reached for a gun and despite Sandham's screams to stop, Raposo, "grinning," shot him, Sandham said.

Sandham was wearing a bulletproof vest, but when the shot hit him he "flinched," causing his gun to go off and shoot Raposo, he said. MH then fired, which caused Kellestine to "flinch" and shoot as well, Sandham said.

Raposo would die in a pool of blood on the barn floor.

Then Kellestine, who Sandham called "a man to be feared," said the remaining seven men would be put in their cars and driven back to Toronto, more than two hours away, Sandham said.

"Everybody thought they were going home," he said.

Kellestine then began to lead the men out one by one. After three left and never returned, Sandham said he went outside because the sight of Raposo started to make him sick. That's when he saw Kellestine shoot one of the men, Frank Salerno.

"I was in shock," Sandham said. "I was just like: he's shooting everybody."

He considered shooting Kellestine, running away or phoning the police, but did nothing, Sandham said, sniffling.

Then Mushey asked Kellestine to "do" the next two men, leaving only one -- Flanz -- Sandham said.

"If you don't like it get in one of the cars and I'll be right with you," Sandham recalled Kellestine telling him.

When Kellestine wasn't looking, Mushey shot Flanz for Sandham, saying "you owe me one," Sandham said.

Sandham's emotional testimony corroborated many details that MH, the Crown's star witness, testified about, though there were many glaring differences, notably that MH testified he saw Sandham shoot Flanz.