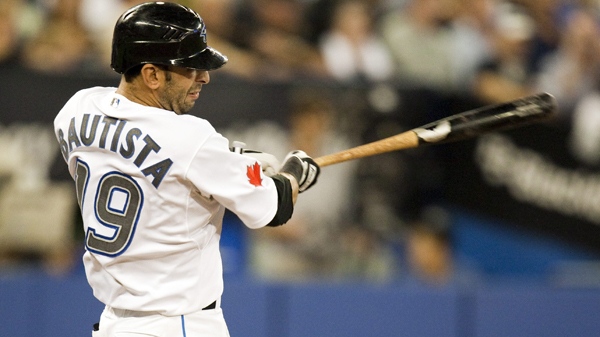 Bautista's second home run of the game -- and major-league leading 40th of the season -- broke open a 2-2 tie. The homer came with one out in the eighth inning against David Robertson (2-4).

Bautista also hit a two-run homer in the third.

Reliever Scott Downs (5-5) picked up the win and Kevin Gregg earned his 28th save before 29,198 at Rogers Centre.

Bautista was also at centre stage during an altercation in the sixth inning that saw both benches empty.

Bautista had a pitch from rookie right-hander Ivan Nova whiz over his head. There was a warning from plate umpire Jerry Meals as Bautista gestured and started to walk toward the mound while Nova, making his first major-league start, extended his arms in innocence.

Order was restored quickly and Bautista hit a fly to centre on the next pitch.

Nova allowed six hits and two runs in 5 1/3 innings. He was removed after Vernon Wells beat out an infield hit.

Neither starter was involved in the decision as Morrow allowed four hits and two runs in his six innings.

Morrow appeared to have the velocity back that was missing last Tuesday in Oakland when he allowed two earned runs in four innings in a no-decision. That was nine days after his one-hit, 17-strikeout win over the Tampa Bay Rays Aug. 8, when he lost a no-hitter with two out in the ninth.

He had three strikeouts in the first inning but also had a one-out walk to Nick Swisher and a two-out double to Robinson Cano that put New York into the lead.

The Blue Jays squandered a big chance in the bottom of the first against Nova, who was appearing in his third major-league game.

Fred Lewis singled and took third on Escobar's double. Jose Bautista walked to load the bases for Vernon Wells who hit a fly to shallow left. It turned into a double play when Lewis was thrown out trying to score by Brett Gardner.

The Blue Jays took the lead in third on Bautista's homer on a 2-1 hanging curve. It followed an infield hit by Escobar that brought protests from Yankees first baseman Mark Teixeira and manager Joe Girardi.

It was the Blue Jays turn to argue after Escobar ended the fifth with a fly to left. Escobar was ejected between innings for arguing balls and strikes as he went out to his position and then so was Gaston for the second time this season after objecting to Meals. John McDonald took over at shortstop.

The Yankees had their turn again when Swisher started arguing a called third strike to start the sixth. Girardi came out to pry his right-fielder away from Meals.

After Teixeira became Morrow's 11th strikeout victim of the game to make the second out of the sixth, Cano walked and scored on Jorge Posada's double to make the score 2-2. Morrow caught Curtis Granderson looking for his 12th strikeout to end the sixth.

Morrow has been much better at home this season, carrying a 7-1 record and a 2.83 earned-run average in 11 previous starts at Rogers Centre this season coming into Monday's game.

Notes: Derek Jeter was not in the starting lineup Monday. He was being given a day off until the ninth when he made the final out as a pinch-hitter. Eduardo Nunez started at shortstop... .Blue Jays third baseman Edwin Encarnacion was back in the starting lineup after missing the three games in Boston with a sire left wrist....Left-hander Ricky Romero was sent to his Toronto residence to recover from strep throat but is not expected to miss his next start...Dustin Moseley (3-2, 4.76 earned-run-average) will start for New York Tuesday against Marc Rzepczynski (1-1, 4.76 ERA)....Wednesday it will be Phil Hughes (15-5, 3.90 ERA) against Brett Cecil (10-6, 3.90 ERA).