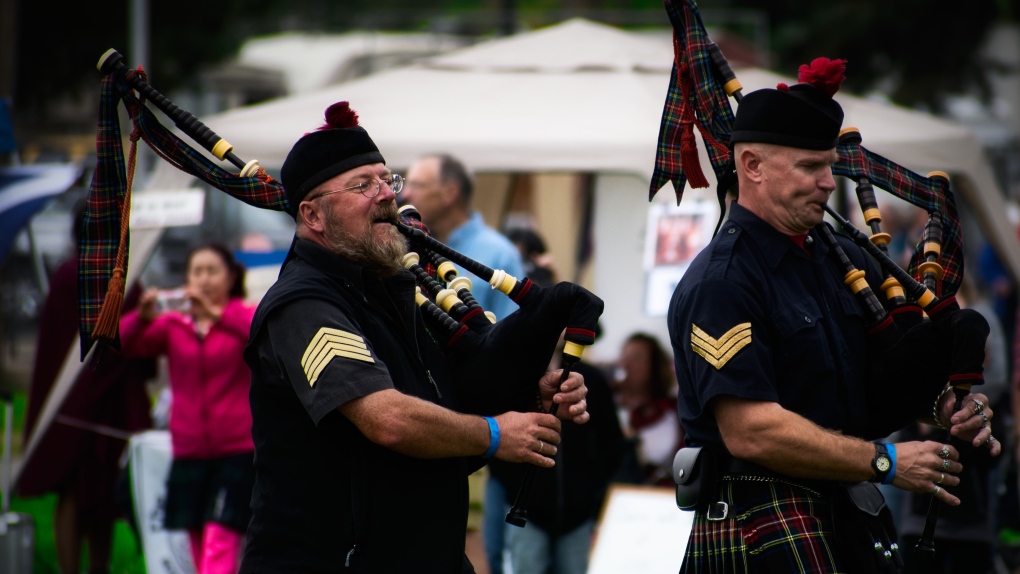 Bagpipers are seen in this undated file photo. (Kevin Bidwell/Pexels)

Bagpiping may be dying in major Canadian cities, one longtime piping instructor contends, but there is renewed interest in smaller Ontario communities -- including one you might not expect.

"In Toronto certainly there are fewer and fewer people playing, and the people that are, are at least in the competition areas, moving to the same bands so the bands are getting larger, but there are fewer of them,” says David Stewart, pipe major with the Georgetown Pipe Band.

Not only does Stewart lead the Georgetown band, he also teaches at a private school in the Sikh community. He currently has 12 pipers and six drummers, all under the age of 12, and expects another 40 students next year.

"If it's funded by the schools and the parents are supportive, it's not dying," Stewart says.

Family tradition can also be a strong incentive to learn the pipes and drums.

As a young child, Ewan Allan, now 17, watched his father play with the Streetsville Pipe Band. When the Georgetown, Ont. band advertised for new players, he decided to try the snare drum. "I tried it and I ended up enjoying it, so here I am now."

He added, "It's a lot of work and pushing each other but we also have a lot of fun between practices and during the games."

Another member of the Georgetown band, 19-year-old John Cleland, grew up with bagpipe music around the house.

"I have a lot of bagpipers in my family, and my dad's a bagpiper, so I just sort of fell into it, I guess," he says.

Cleland thinks that teaching is key. "If you had some sort of school program to teach people piping, then that would probably help a lot."

Matthew Culbert, 20, started piping in Army Cadets. "The course of pipes and drums as a camp course came up and I just sort of said … looks interesting. That's how I got into it."

He thinks public exposure will promote the art. "Continue to do what we do. Play in our competitions, but especially play in public parades.”

Stewart believes that many veteran players are not giving back to the music. "There are some very good teachers around, and some people who are really keen on keeping the art going, but not enough."

"People have to commit to teaching," he adds.

The Scottish government started a program called The Scottish Schools Pipe Band Trust to foster the art of piping and drumming.

They now have 2,500 students and a separate competition in March for these bands. This year approximately 65 school bands competed, more than there are in all of Ontario.

The funding goes to paying instructors who aren't regular schoolteachers, and there are startup grants to purchase equipment.

"If that were the case here in Ontario, I'm not sure it would be a dying art," Stewart says.