Arrests made during climate action protest on Bloor Viaduct

The Bloor Viaduct has now reopened after climate action protesters blocked the busy bridge all morning.

Activists starting blocking traffic at both Broadview Avenue on the east side and Castle Frank Road on the west side at around 8 a.m. 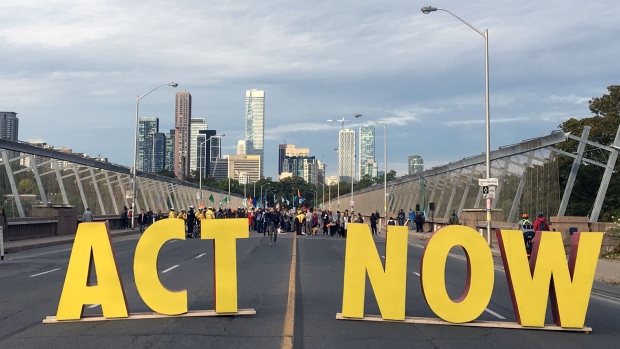 Organizers did not say how long they planned to block the bridge but at around noon, 20 protesters were arrested in an attempt to reopen the roadway, according to police.

"The basic thing is we have a Charter right to assemble in public space. The police, we understand it is their job to maintain order, we have no hard feelings (toward) the police. What this means is that the government would rather arrest people than take real action on climate change," one protester told CP24 on Monday afternoon.

"They have received orders that this bridge has to be open. It is more important for business as usual to continue than it is for us to take action and protect future generations."

The protesters, who are a part of the group Extinction Rebellion, said they decided to occupy the bridge as part of a broader movement.

DEMO: Prince Edward Viaduct is closed in both directions for a protest from Broadview Street to Castle Frank Road. Please avoid the area. #GO1931639 ^CdK

“Extinction Rebellion was a UK founded organization. Today, Oct. 7, is what they call 'global rebellion' which is a series of direct actions, non-violent, peaceful protests that are occurring all around the world to draw attention to the urgency of the climate crisis,” one protester, who identified himself only as Kevin, told CP24.

“I’m here taking the day off of work and I’m doing an uncomfortable thing to block traffic, which is not in my nature, because if we continue with business as usual ,we are going to continue to miss the climate goals that we have. And the stakes are very real. We have a narrow window of time where we can take significant action.”

Protests are taking place today in other Canadian cities, including Halifax, Edmonton, Vancouver, and Victoria.

“We need to take this seriously," said Kate Petriw, who joined the protest in Toronto this morning. "We are looking at the science and it is completely terrifying." 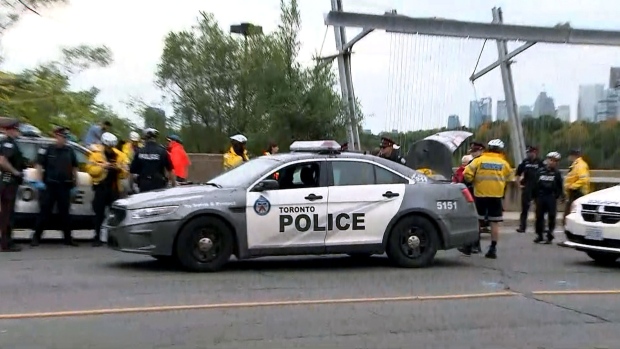