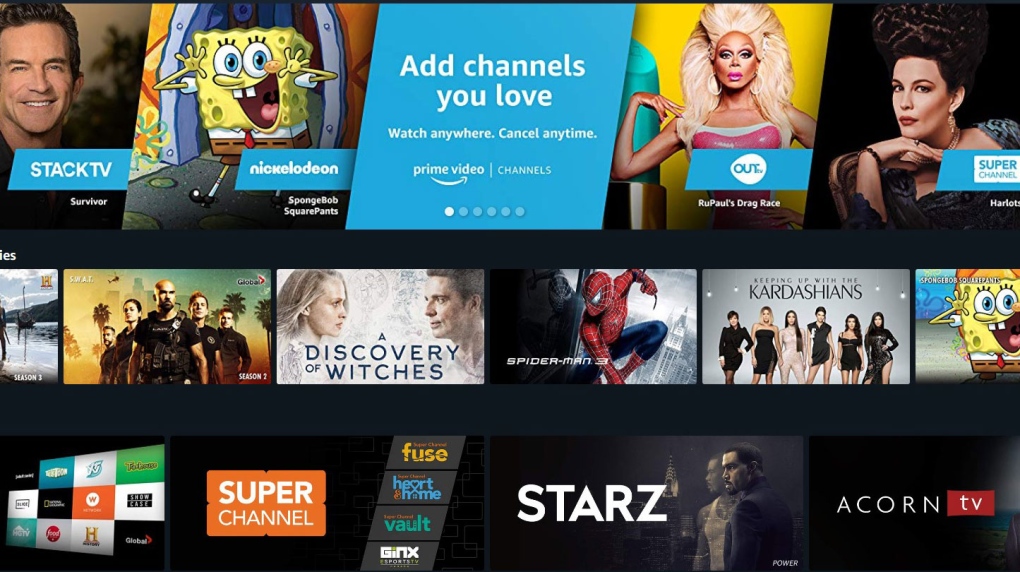 Amazon Channels are shown in this handout image. Canadian television viewers will soon have another streaming option that looks very similar to a cable package. THE CANADIAN PRESS/HO-Amazon Prime Video

TORONTO -- Canadian television viewers will soon have another streaming option that looks very similar to a cable package.

Amazon says it's finalizing plans to make Prime Video Channels available in Canada for the first time, giving its Prime Video subscribers (who pay $7.99 per month) the option to purchase from a selection of 13 channels of live and on-demand programming. The launch date still hasn't been confirmed, though the company said it will be "soon."

It marks the first time cord cutters who have ditched traditional cable and satellite companies will have access to several popular channels, including kids' broadcaster Nickelodeon, and multi-channel movie packages Super Channel and Hollywood Suite.

There's also StackTV, a juiced-up selection of TV channels that's almost like a mini cable package in itself. For that bundle, subscribers will pay $12.99 per month for access to live and on-demand programs from a roster of 12 networks, including Adult Swim, Food Network, Global, Slice and Showcase, all owned by Corus Entertainment.

A selection of existing streaming platforms round out the current lineup, including horror outlet Shudder, indie movie hub Sundance Now, reality TV chest Hayu and LGBTQ-centric OutTV, which can all be added to Amazon for a range of $3.99 to 6.99 per month for each channel.

Starz, a new channel offering launched by Bell Media that's also available on the Crave streaming platform, is $5.99 per month.

The concept behind Prime Video Channels isn't much different than an "a la carte" cable bundle, and the company is pitching it as a way to centralize billing and passwords for the TV services you love through one provider. But the selection will be notably sparse when it launches -- there's no partnership with its major competitor Netflix, nor one with Crave, HBO Canada or Showtime.

Also missing from the lineup are sports and news channels.

Some broadcasters are sitting out the launch entirely, including CBC, Bell Media's CTV and TSN, as well as Rogers-owned channels, which include Citytv and the OMNI multicultural stations.

Greg Hart, vice president of Amazon Prime Video, said he's hopeful that voids in the offering will be filled over time.

"We'd love to have sports available... and we look forward to adding that," he said in a phone interview.

"Sometimes those are a little more complicated to bring off."

He pointed out that the U.S. version of Prime Video Channels launched with about 25 channels before growing to a slate of more than 150, which include both traditional live feeds and streaming platforms.

But the hurdles in Canada could prove more significant.

Canadian broadcasters have spent years griping to the federal regulator about the increasing dominance of U.S. streaming giants, including the threat of Amazon's colossal presence.

In 2016, Mary Ann Turcke, who was Bell Media's president at the time, expressed concerns over Amazon's pending arrival as a streaming business. She said it would be more difficult for Canadian companies to acquire rights for the popular titles needed to satisfy subscribers if a giant like Amazon was in the bidding wars.

Last November, the broadcasters ratcheted up their sentiment, telling Ottawa that Prime Video Channels poses "an existential threat to the regulatory system."

Helene Laurendeau, deputy minister of Canadian Heritage, said in a memo to the Canadian Radio-television and Telecommunications Commission that virtual TV service providers "particularly Amazon Channels, (are) going to be even more disruptive to the Canadian broadcasting system than foreign streaming services."

She said Prime Video Channels would effectively make "moot" the concept of "skinny basic" and "pick and pay" packages from TV service providers, and force any potential Canadian competitors with similar virtual TV services out of business.

Hart rejected suggestions that Prime Video Channels would be a threat to Canadian TV channels.

"My point of view is it's actually a great way for broadcasters to distribute their content," he said.

"It offers another outlet."

Daniel Eves, senior vice-president of TV networks at Corus Entertainment, echoed that sentiment -- the partnership with Amazon is a way to put the broadcaster's programming in front of a broader online audience, he said.

"We're not going to launch an SVOD (subscription video on-demand) service that's an amalgamation and take that route. There are lots of those out there," Eves said in an interview Monday as Corus unveiled its upcoming season.

"It's effectively taking our best channels and putting them on another platform so that more people have access to them."