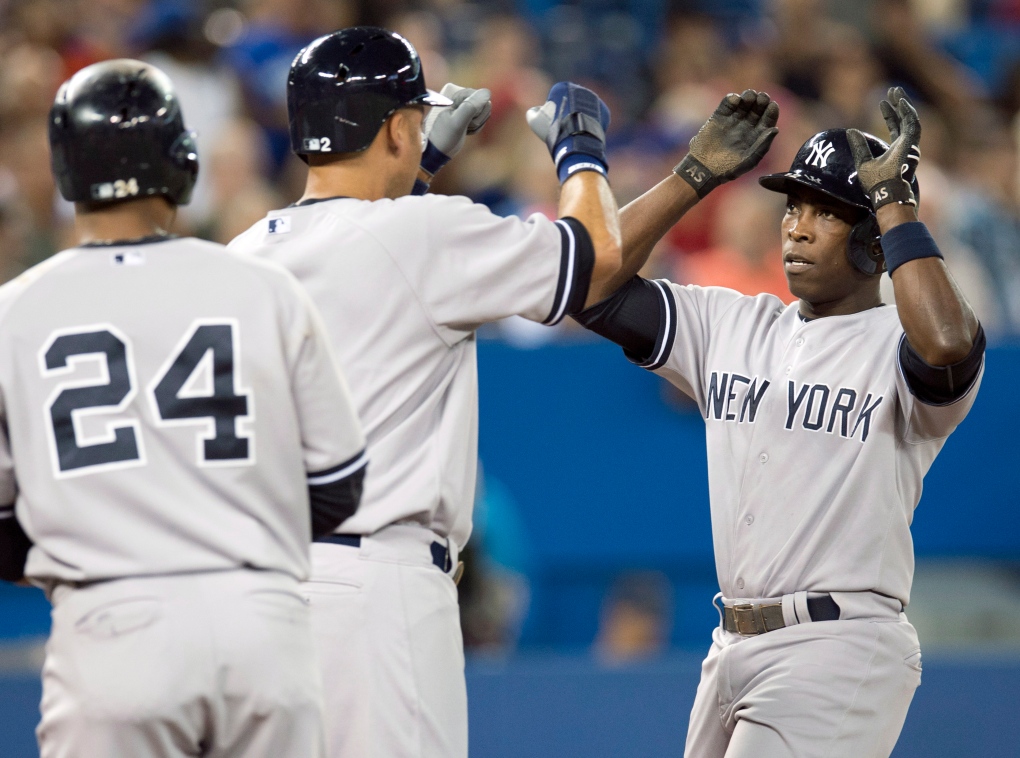 Soriano hit a towering three-run shot in the first inning and added a solo shot in the third. The second blast was his 28th homer of the season and 400th of his career.

Mark Reynolds and Alex Rodriguez added solo homers for the Yankees, who had 12 hits on the night. Pettitte (10-9) allowed five hits and two walks while striking out three.

New York (70-62) scored four runs off Toronto starter J.A. Happ (3-4) before the Blue Jays recorded an out. Brett Gardner doubled, moved to third on a wild pitch and scored when Derek Jeter stroked a single up the middle.

Robinson Cano reached after he was hit in the left hand by a pitch and Soriano followed with a no-doubt blast to deep left field. Cano left the game and underwent precautionary X-rays, which were negative.

Soriano's second homer bounced off the top of the wall, just out of the reach of Toronto left-fielder Kevin Pillar. The Blue Jays got their first hit of the game in the bottom of the frame when Moises Sierra singled to left-centre field.

Toronto (59-74) put two runners on in the fourth when Rajai Davis doubled and Brett Lawrie of Langley, B.C., reached on a walk. Mark DeRosa struck out looking to end the threat.

Esmil Rogers relieved Happ with two outs in the fifth inning and got Vernon Wells to line out with two runners on. Happ allowed five earned runs, seven hits and two walks while striking out five.

Sierra hit a one-out double in the fifth and tried to score on a single to centre field by Ryan Goins. Gardner's throw home was accurate and Sierra slid but couldn't avoid Chris Stewart's tag.

Reynolds hit his 17th home run of the season in the sixth inning. Rodriguez went deep an inning later for his fourth homer of the year and 651st of his career.

The Blue Jays got on the board in the eighth inning against reliever Adam Warren.

Pillar doubled to the wall in left-centre field to score Goins from first base. Jose Reyes followed with a single to put runners on the corners but pinch-hitter Anthony Gose hit into an inning-ending double play.

Sierra had three of Toronto's 10 hits. Announced attendance was 34,047 and the game took two hours 43 minutes to play.

Notes: Cano, who was replaced at second base by Eduardo Nunez, is listed as day to day. ... It was Soriano's sixth multi-homer game of the season. ... The Blue Jays outrighted pitcher Chien-Ming Wang to triple-A Buffalo before the game. He had been designated for assignment a day earlier. ... Todd Redmond (1-2) is scheduled to start for Toronto in the series finale on Wednesday night. The Yankees will counter with fellow right-hander Hiroki Kuroda (11-9). ... The Blue Jays are off Thursday and will wrap up the six-game homestand with a weekend series against the Kansas City Royals.