An indictment has been unsealed by a U.S. judge in Brooklyn that alleges seven defendants on behalf of the People's Republic of China spent years harassing, threatening, surveilling and intimidating a U.S. resident to return to China.

The investigation has links to Canada, claiming one suspect "offered for PRC leadership working on the case to come meet [the victim] John Doe-1 in Toronto, Canada."

The U.S. Attorney General Merrick Garland spoke about the case Wednesday saying "the suspects threatened and harassed the victim's family members both in the U.S. and China."

This indictment has been released on the heels of the RCMP confirming they are investigating reports of so-called "police stations."

Safeguard Defenders released a report outlining at least 54 of these stations around the world, listing three in the GTA.

"Some of these stations, or at least 30 stations, [were] established by Fuzhou police," said Yenting Chen, a researcher with the NGO. 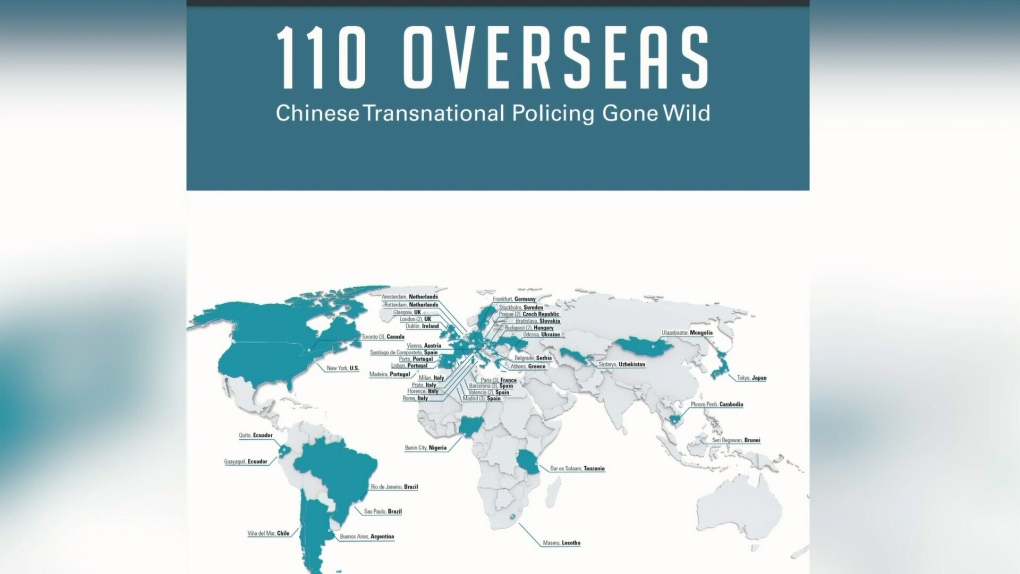 A map of 54 so-called Chinese "police stations" is seen in this image. (Safeguard Defenders)

One is a business in a Markham plaza. Inside you could see used tea cups and garbage left on a boardroom table.

Another is a house in Markham where neighbours say a family lives.

The Chinese Consulate General told CTV News Toronto it started these "service stations" to help Chinese nationals during the pandemic.

"For services such as driver's licence renewal, it is necessary to have eyesight, hearing and physical examination. The main purpose of the service station abroad is to provide free assistance to overseas Chinese citizens in this regard."

"There are some positive sides of these operations, but what Chinese local authorities didn't mention is that they are actually used as a weapon to target Chinese overseas," Chen said.

Chen told CTV News Toronto there are now examples of criminal charges being linked to these stations.

"Dutch media, they exposed that this kind of service station was found to persecute, to harass Chinese dissidents in Netherlands and it was conducted by a member of the Rotterdam service station," he said.

The researchers believe there are likely more than the 54 they have in their report.

"Most of these stations they are run by overseas associations," said Chen, "they are all like supervised by Chinese authority."

He added that for a foreign government to act this way in another country, is a violation of its sovereignty.