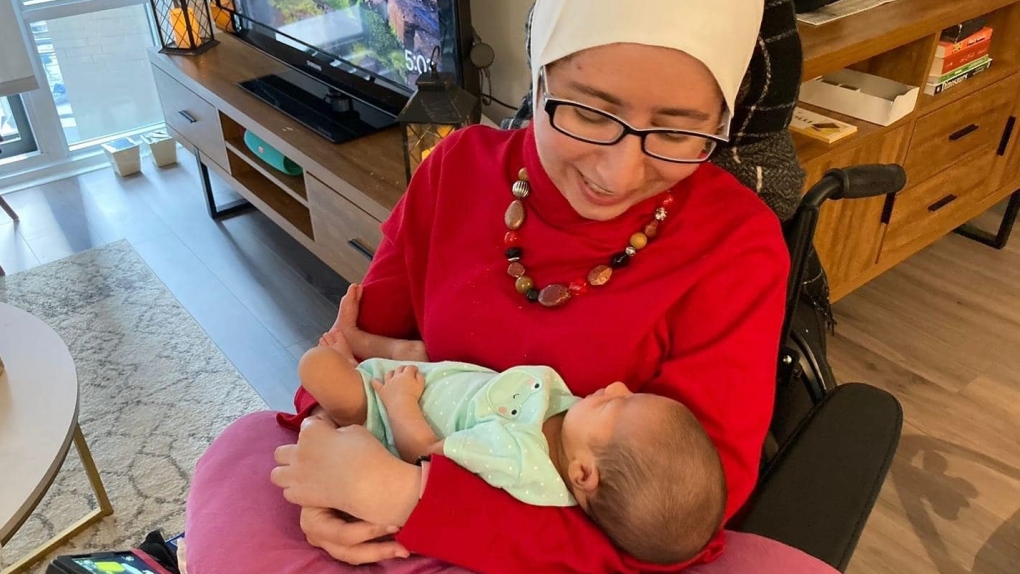 An Ontario woman is urging the government to reconsider insurance eligibility for a drug that could save her life but costs hundreds of thousands of dollars.

Toronto resident Nouma Hammash, 39, grew up in the United Arab Emirates. Diagnosed with spinal muscular atrophy (SMA) at a young age, she has lived most of her life losing the ability to utilize her muscles.

“It’s a slow death,” Hammash told CTV News Toronto during an interview over the phone.

In 2016, Hammash moved to Canada. Now, she works at Spinal Cord Injury Ontario as a mediator and is an advocate for other patients facing similar situations.

However, since Hammash’s arrival in Canada, her condition has worsened and she has yet to find a successful treatment plan.

“There's so many ways in which I’m continuing to lose my power and with that, I lose my independence,” she said.

“We’re not only speaking about the physical death – when the spirit leaves the body – but about the death of [an] independent life.”

In June 2017, Hammash felt she nearly had the solution when Health Canada approved Spinraza for Canadian SMA patients. Spinraza, a brand name of the medication nusinersen, is used to treat spinal muscular atrophy and slows the progression of the disease.

However, her dreams were soon dashed when she found out she wouldn’t be able to access coverage for the costly medication. Without insurance, reimbursement or government coverage, the first year’s worth of Spinraza costs about $700,000.

“I’ve never got a single dose,” Hammash said. When asked why, she explained, “because I’m an adult.”

As of now, Ontario only offers Spinraza coverage to patients under the age of 18, due to a lack of controlled trials and data in older age groups. That eligibility expanded slightly in 2019 to include some adults on a case-by-case basis, but Hammash still does not meet the criteria.

While there’s nothing stopping those trials from taking place, Izenberge said they are “logistically challenging and expensive.” Because Health Canada looks for evidence-based research, when a certain drug is only required by a small population, it can complicate and extend the approval process

“You need huge numbers of patients over a long period of time and I don’t know if that’s ever going to happen,” he said.  “That's really the issue – and to pay out of pocket for these medications is just not feasible.”

In a recent interview with CTV News Toronto, Beth Vanstone, an Ontario mother whose child suffers from cystic fibrosis (CF), says conditions like SMA and CF are the reason Canada needs a national framework for rare diseases and new medications as they come out.

She says Canadian health-care and insurance policies aren’t keeping up with the science.

“Science has marched forward,” she said. “Our system, sadly, just hasn’t kept up.”

Meanwhile, Izenberg said he hopes research into the drug will continue.

“Ultimately, what would be amazing is if we get super strong data that will demonstrate an unequivocal benefit,” he said, although admitting he has no concept of if or when this will take place.

However, for SMA patients, time is of the essence and many have already been waiting for years.

Hammash says if she's forced to wait years for clinical data to jusifty her need for Spinraza, it may very well be too late.

Ten children in Canada were found to be suffering from severe acute hepatitis not caused by known hepatitis viruses over a nearly six-month period recently, the Public Health Agency of Canada announced Friday.

Russia's claimed seizure of a Mariupol steel plant that became a symbol of Ukrainian tenacity gives Russian President Vladimir Putin a sorely needed victory in the war he began, capping a nearly three-month siege that left the city in ruins and more than 20,000 residents feared dead.