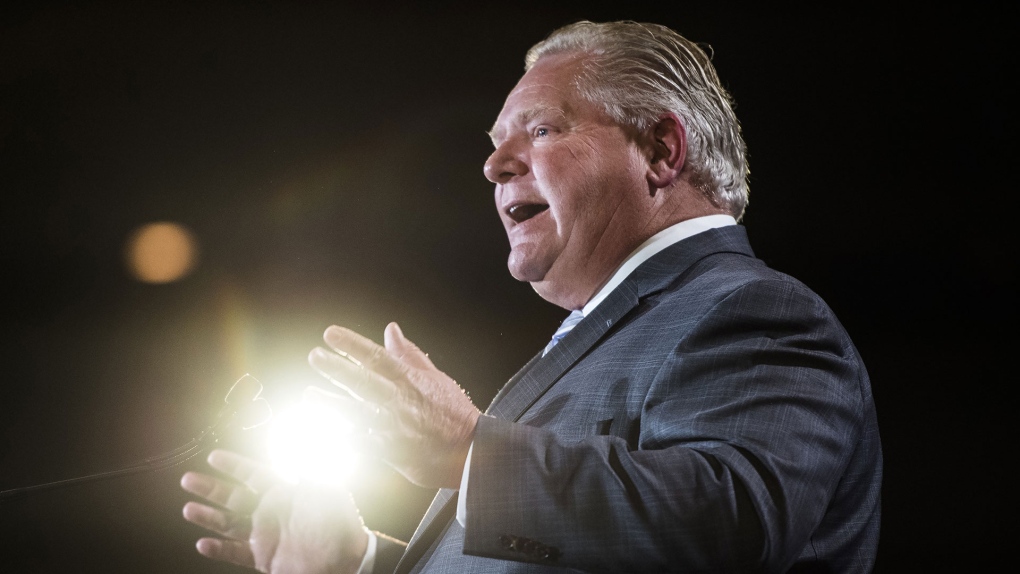 Ontario Premier Doug Ford speaks at the Economic Club of Canada in Toronto on Monday, January 21, 2019. Major health-care reform, policing changes and an inaugural budget with a deeper look into the government's austerity agenda are on tap at the Ontario legislature as politicians return Tuesday from a winter break. THE CANADIAN PRESS/Nathan Denette

TORONTO -- The Ontario government's decision to reverse funding cuts to a child benefit program and the province's children's aid societies marks the latest in a series of instances in which Premier Doug Ford's or his ministers have backtracked on previous announcements. Below is a list of other decisions the Progressive Conservatives have walked back:

Transition Child Benefit: The government had planned to stop the benefit as of Nov. 1, but has now decided to continue it as the province reviews its social assistance programs. The benefit provides up to $230 a month for low-income families not receiving other child benefits.

Autism: In February, the government announced a revamp of the Ontario Autism Program. It was framed as a way to clear a massive waiting list for services, but would have given families a relatively small amount of money based on their income, not the needs of their child. It also would have effectively cut off thousands of kids currently in government-funded therapy. After a loud and sustained outcry, the government announced a reversal, saying it was going back to the drawing board on a needs-based program and would double the current budget.

Public health: Mayors across the province banded together to fight retroactive cuts to public health funding, and the government ultimately relented. The cuts, in the form of a new cost-sharing arrangement, will mostly go ahead in 2020, but the mid-year cuts that would have taken effect after municipalities had already passed their budgets were cancelled.

Child care: Municipalities will still have to pay 20 per cent of the cost of creating new child care spaces -- which the province previously fully funded -- as announced at the same time as the public health cuts. But the government backed off somewhat on other elements of child-care funding cuts, delaying some to 2021 and others to 2022.

French university: As part of the government's efforts to balance the books, it announced last fall that it was cancelling plans for a French-language university. The move sparked an outcry among Franco-Ontarians and prompted a Progressive Conservative caucus member to quit. In September, Ontario and the federal government announced they had reached an agreement on jointly funding a French-language university.

Appointments: Ford revoked two appointments for agents-general positions in London and New York City. One person was reported to be related to Ford's then-chief of staff, Dean French, and it emerged that the other played lacrosse with French's son.

Greenbelt: Ontario announced in January that it would not move forward with a controversial element of proposed legislation that could have opened up the province's protected Greenbelt to development.

Size of cabinet: When Doug Ford came to power he cut the size of the cabinet to 21 people, down from 29 under former premier Kathleen Wynne. In a cabinet shuffle this summer, he added several new portfolios, bringing the size to 28.

This story by the Canadian Press was first published on Oct. 3, 2019