TORONTO -- York Region Public Health says 62 confirmed cases of COVID-19 have been linked to an outbreak at a window manufacturing and installation facility in Vaughan.

In a public notice posted on Sunday, public health officials said they were notified of the first case at State Window Corporation located on Hunter’s Valley Road, just east of Highway 50, on Nov. 10.

Since then, 61 other cases have been identified, prompting York Region Public Health to declare an outbreak on Nov. 20.

Also, there are five probable cases and one case under investigation.

The risk of exposure is low to residents because the facility is not open to the public.

York Region Public Health said an on-site inspection was conducted and health officials are working with the employer to identify additional cases and close contacts.

"This particular workplace is a typical example of places where there are lapses that occur," Dr. Karim Kurji, York Region's medical officer of health, said in an interview with CP24.

"For example, folks that might have actually been in contact with a case of COVID-19 in a household may have come into work without having self-isolated for 14 days."

He noted carpooling and socializing outside of the workplace also contribute to the transmission of the virus.

Of the 62 individuals, 28 are from Peel Region, 22 are from Toronto, seven are from York Region, and five are from Simcoe-Muskoka.

"There are some workers who tend to work in other locations, and so they may actually plant COVID-19 into other places," Kurji said.

"It illustrates how a given workplace can actually export cases to other jurisdictions," Kurji said. 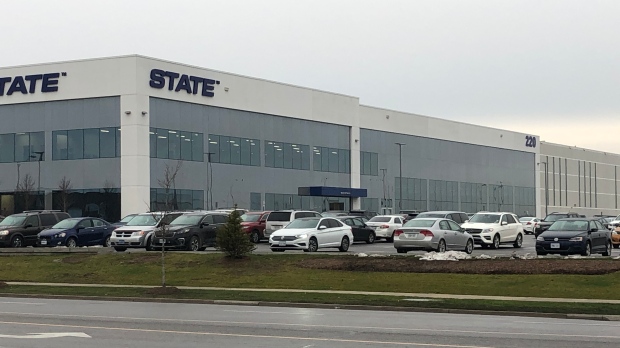 He said they have provided guidance to the employer who had taken some actions. These include giving face shields, hand sanitizers and disinfecting wipes to workers, increasing monitoring of adherence to physical distancing, clearing of lunchroom tables after every use, and introducing multi-lingual screeners to address language barriers.

"With all these practices, and with the involvement of the Ministry of Labour as well, we're hoping that this comes under control," Kurji said.

This is the second outbreak at the facility. A total of 17 cases were reported during the initial outbreak that was declared on May 17 and lasted until July 6.

There are currently 17 active workplace outbreaks in the region.

A dozen more establishments in the region were charged Sunday for violating COVID-19 protocols.

York Region said the charges resulted from an enforcement blitz in the area this weekend to ensure businesses are complying with public health measures.

On Sunday, inspectors with York Region Public Health, bylaw officers and police visited 256 businesses, 12 of which were fined under the Reopening Ontario Act and Section 22 of the Health Protection and Promotion Act.

They include a Lowe's in Vaughan, a Costco and a Walmart in Richmond Hill, a Mcdonald's in Markham, a LA Fitness in East Gwillimbury and a Tim Horton's in Vaughan.

Inspectors also charged TRIO Sportsplex, where two soccer games held at the facility have been linked to at least 11 cases.

York Region said the charges were issued because the facility exceeded the indoor capacity limit of 10 people.

Kurji noted most of the businesses that have been inspected this weekend were compliant.

A total of fourteen establishments were charged under the Act on Friday and Saturday.