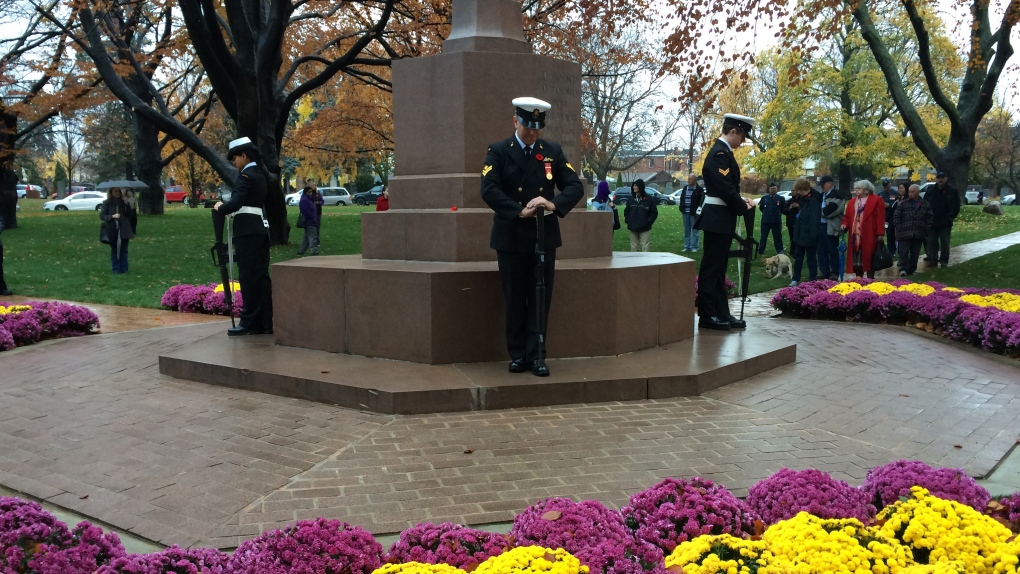 Every Nov. 11, Canadians across the country remember the courage and sacrifice of those who served during Canada’s military conflict and peacekeeping missions.

In Toronto, there is no shortage of events to mark the occasion. Here are five ways the city is honouring Canadian veterans this year.

The City of Toronto will be marking Remembrance Day at Old City Hall. This year’s program includes a reading of “In Flanders Fields,” the laying of wreaths, two minutes of silence and a parade from City Hall to Old City Hall.

Toronto Mayor John Tory will also be speaking at the ceremony.

Similar events will be held at civic centres across the city including: East York, Etobicoke, North York, Scarborough and York.

Every November 11, the CN Tower is lit poppy red in remembrance of Canadians killed in war and peacekeeping missions, as well as to honour veterans and members of the Armed Forces.

CN Tower staff will pause all events for two minutes of silence at 11 a.m., followed by a reading of the poem “In Flanders Fields” and “The Last Post” performed on trumpet.

The CN tower will be open as usual on Wednesday and any visiting soldiers, veterans and Legion members will get free admission.

The Fort York National Historic Site is partnering with the Toronto chapter of the Imperial Order Daughters of the Empire for its Remembrance Day ceremony this year.

At 10:45 a.m., a procession led by period-uniformed military members will make its way from the west gate of Fort York to the Strachan Avenue Military Cemetery, located on Garrison Common.

Starting at 11 a.m., military members who fell during conflicts such as the War of 1812, The Crimean War, South African (Boer) War and the two world wars will be remembered and honoured.

Subway and Scarborough RT cars will be held at station platforms. Bus and streetcar operators will stop their vehicles at a regular service stop prior to 11 a.m., and remain there for the duration of the pause.

All service will resume immediately following two minutes of silence.

Current and former members of the Canadian military can ride the TTC for free on Remembrance Day, as long as they show valid proof of membership.

TTC buses and streetcars are also carrying signs reading “Lest We Forget” in their front windows.

Veterans and the public will gather to remember and honour the wartime sacrifices that Canadians have made for their country at the Toronto Zoo on Wednesday.

Admission for veterans and all guests attending the ceremony is free from 9:30 am to 11:00 am.

The year-round parking fee will be in effect except for VIPs, veterans in uniform or those with medals, and any other persons in uniform, including serving Armed Forces members, police, firefighters, paramedics and TTC staff.