'You hear them screeching': North York residents fed up with rodent problem 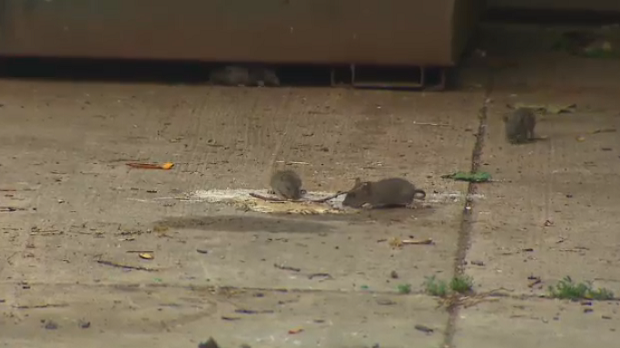 Residents in North York say they have complained to their superintendent about a rat infestation in and around their apartment complex.

Residents in North York say they’re frustrated after voicing multiple complaints about a rodent problem in and around their townhouse complex.

“Because the rats keep passing, I have to keep washing the floor,” Betsy Andrade told CTV News Toronto on Friday.

Rats have been congregating inside and outside the complex, located on Gosford Boulevard, near Jane Street and Steeles Avenue.

“We’re not talking about little creatures here. We’re talking about big boys,” said Andrade, adding that she would move if she wasn’t eight months pregnant.

Other residents said they also complained about the infestation.

“It grossed me out because rats have diseases,” said tenant Thomas Ellis.

“You hear them screeching and scratching on stuff,” said tenant Alesha Bacchus, adding that a rat had even chewed through her daughter’s shoe from inside their home.

The property manager, who did not want to be identified, told CTV News Toronto in a telephone interview that he hadn’t heard of the rat problem before.

“It’s a serious issue, so it’s not something we would sweep under the carpet,” he said.

“The person they should have complained to is the superintendent.”

But residents say they already have.

“I’ve been complaining about it and the super doesn’t want to do anything about it,” said Bacchus.

As of last week, the number of complaints about rats has not increased, said City of Toronto spokesperson Wynna Brown.

The owner of the property told CP24 that there was an exterminator called to the complex in June. On Friday, they were called again to try to fix the problem.

Counc. Anthony Perruzza told CP24 that property standards bylaw officers have visited the townhouse on several occasions. The landlord was asked to get rid of the rats, he said.

According to Toronto spokesperson Tammy Robinson, if the owner doesn’t comply, the city can take over and bill them.