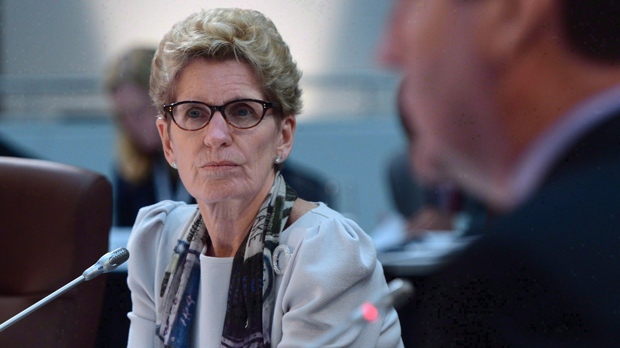 TORONTO -- Critics who claim parents weren't consulted during an update of Ontario's sexual education curriculum are wrong, Premier Kathleen Wynne said Tuesday as she defended her Liberal government's modernization of the lesson plan, which newly elected Tory leader Doug Ford has pledged to scrap if he wins the province's spring election.

Ford, who narrowly won the Progressive Conservative leadership late Saturday, has said he'd repeal the 2015 curriculum update and has repeatedly claimed parents weren't consulted on the measure. Wynne swung back Tuesday, saying such criticisms were false.

"It's just not true," she told reporters at an event in Toronto. "Parents were consulted. Psychologists, psychiatrists, police, people who live in communities and are concerned about the safety of young people were consulted."

About 4,000 parents, as well as child development professions, were given an opportunity to weigh in on the changes to the curriculum, Wynne noted.

Wynne said the curriculum, which had not been updated since 1998, was in need of modernizing given the advances in technology and arrival of social media.

Ford has been criticizing the curriculum throughout the Tory leadership campaign, with his rhetoric pleasing social conservatives who've demanded changes to the program since it was implemented.

Ford's stance comes after social conservatives inside the party accused former leader Patrick Brown of flip-flopping on the sex-ed issue.

The new Tory leader has also said he's focused on straightening out the province's finances and has criticized the Liberals for Ontario's heavy debt.

Wynne, whose Liberals have abandoned a key promise to balance this year's budget, said Tuesday that the economy remains uncertain and the government needs to continue to support residents.

"We can't step back and not provide that care for people," she said. "What the Conservatives are saying is that 'no, no, no, government can step back. We can cut taxes. We don't have to fight climate change. We don't need to be involved in people's lives.' ... It's not what I know people are looking for right now."

Last week, Finance Minister Charles Sousa said the province will run a deficit of less than one per cent of its gross domestic product starting next year but would not confirm a specific figure.

According to the Ministry of Finance, Ontario's gross domestic product sat at $794 billion in 2016, the latest publicly available data. Using those figures, the government's budget deficit could run as high as almost $8 billion.

Last year, the Liberals posted the province's first balanced budget in a decade and had projected balanced books through to 2019-20. The 2018 budget is set to be tabled March 28.