Woman who had $2,100 stolen won't be reimbursed because she kept PINs in her wallet

TORONTO -- A woman who had more than $2,000 stolen from her bank account will not be reimbursed because she kept the PINs to her credit cards on a note in her wallet.

Whitby, Ont. resident Jackie Lawrence said she always uses different PINs for her bank and credit cards, but she admits they can be hard to remember.

Once, when she couldn’t remember a PIN while at a checkout, she had to leave all her items behind.

“After that incident I wrote down my PINs to make it easier to remember them, so I wouldn’t have a transaction denied because I couldn’t remember my PIN,” Lawrence said.

But earlier this month, Lawrence had her wallet stolen out of her purse. She had been at the bank and stopped to get groceries and at some point her wallet was taken.

“When I went to the grocery store I noticed my wallet was missing from inside my handbag," Lawrence said.

Lawrence said she acted quickly and returned to her bank and said her wallet had been taken, but by the time her cards were canceled there had been cash advances on her credit cards and a bank card totaling more than $2,100.

The banks and credit card company wanted to know how the thief could have accessed her accounts. Lawrence told them she had trouble remembering her PINs, so she wrote them down and on a piece of paper and put them in her wallet.

“The pin numbers were hidden in a compartment of my wallet," Lawrence said. 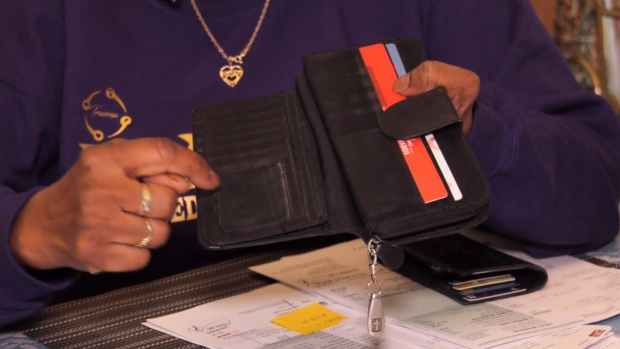 She filed a police report but each financial institution – CIBC, TD Bank and President’s Choice Financial MasterCard—said they would not reimburse her the stolen funds.

“Our investigation found…the individual responsible had access to financial information that you are responsible for protecting…your claim has been denied,” TD Bank said in a letter to Lawrence.

Lawrence said that while she did write down her PINs, it’s not her fault the money was taken. “Yes, my PINs were in my wallet but I didn't put my PINs in my wallet and give it to someone. My wallet was stolen."

You may not be reimbursed for fraud if you write down or tell someone your PIN. Your claim can also be denied if your PIN is too simple. For PIN security, you should avoid easily guessed numbers like your birthday, year of birth, address, telephone number.

Lawrence has requested the police get the bank video showing whoever used her cards. She is also asking the thief for a favor—to return her driver's license, health card and other identification.

“I need it back. It's Christmas. Please be nice and give me back my ID as a Christmas present. That's all I’m asking."

Durham Regional Police said it has made a request to the bank to get video of the person who used Lawrence’s cards. However, even if it shows it wasn't her withdrawing the money, it doesn't mean she'll get it back.