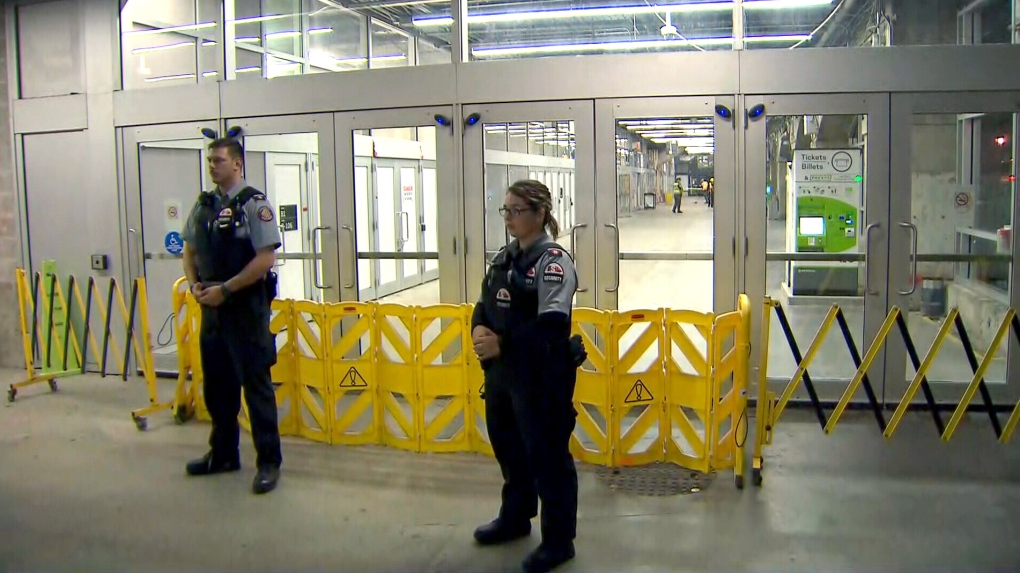 Transit officers stand outside an entrance to Union Station where concrete reportedly fell on a woman passing through on October 11, 2018.

A woman who was struck by a falling piece of concrete while walking through a pedestrian pathway at Union Station last week has retained a lawyer with the intention of suing the City of Toronto and Metrolinx.

Nainesh Kotak, a personal injury lawyer, has told CTV News Toronto that his office will be taking legal action against the city and the provincial transit agency on behalf of a 24-year-old woman identified only as Alison.

Alison was walking through the Bay West Teamway, a pedestrian walkway that runs parallel to Bay Street near the Bay Concourse at Union Station, around 5:20 p.m. when she was hit by a large chunk of concrete that fell from the ceiling.

According to Kotak, Alison remembers stopping in the concourse to check her GO Train time and exchanging smiles with a toddler that was standing nearby.

“She tried to look around but there was blood pouring into her eye. She was in and out of consciousness.”

Alison was taken to St. Michael’s hospital and was discharged later that night.

The pedestrian pathway was closed to commuters while crews completed “minor concrete scaling and repairs”. The area was reopened the following morning after an inspection.

Metrolinx told CP24 at the time that there was no construction work being done in the area at the time of the incident.

Kotak said that Alison is suffering from “severe concussion symptoms” such as vomiting, blurred vision, and slurred speech. She has not returned to work since the incident occurred, Kotak said.

Kotak said his office is currently working on a statement of claim against the City of Toronto and Metrolinx, who jointly own and operate Union Station. He said it may take a few months to determine if there are other parties that need to be named in the claim. He said that he believes “negligence appears quite clear” in this case.

Anne Marie Aikens, a spokesperson for Metrolinx, said that the agency does not have any information about the potential lawsuit, as the incident occurred five days ago.

“Union Station is s jointly owned and operated building where 300,000 go through every day,” she said. “Commuter safety is our first priority in everything that we do because there’s so many people that go through there.”