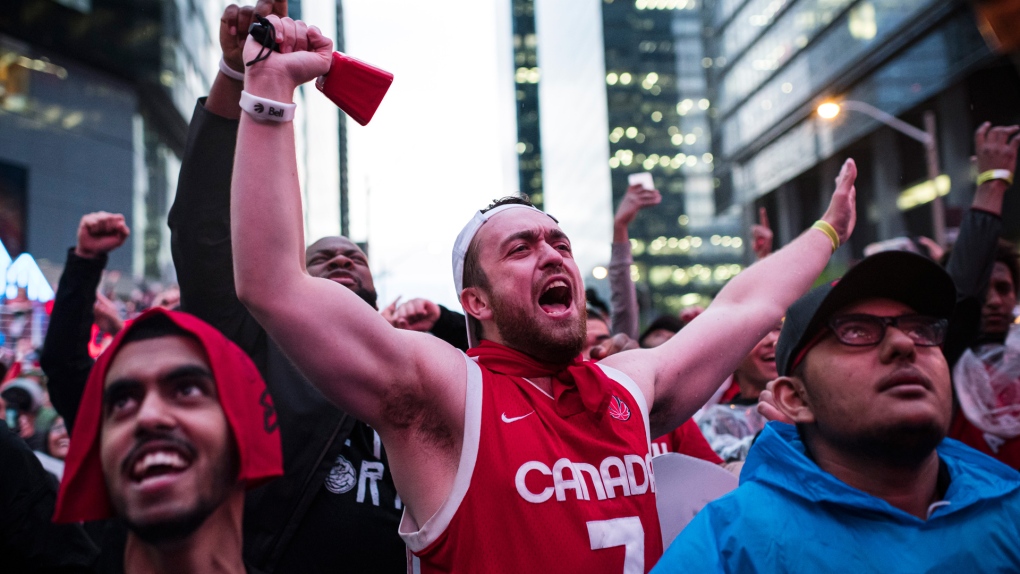 Raptors fans cheer outside of Scotiabank Arena ahead of Game 5 of the NBA Final between Toronto Raptors and Golden State Warriors in Toronto Monday, June 10, 2019. THE CANADIAN PRESS/Christopher Katsarov

TORONTO -- Win or lose, the Toronto Raptors' deep run into the basketball post-season has put Canada's lone NBA team in the spotlight around the league and across the country.

Considered a hockey-town hoops outpost in the team's early days, the Raptors are playoff regulars now and the city's basketball equity has risen exponentially. Being on the cusp of a league title has fans tickled about the present and should help make Toronto more of a preferred destination for free agents in the future.

The Raptors came agonizingly close to clinching the title at home on Monday night against Golden State.

Toronto led with a few minutes left in the fourth quarter but the Warriors came back for a 106-105 victory to force a Game 6 in Oakland on Thursday night.

"This is obviously -- getting 15 (playoff) wins and hoping for one more -- is terrific but there's a lot of people and a lot of sweat equity that went into this great run," said former NBA head coach Jeff Van Gundy. "It didn't just happen overnight."

Toronto entered the league as an expansion team in 1995 and made its first playoff appearance in 2000.

The Raptors have since emerged as one of the league's top teams and are currently enjoying a sixth straight post-season appearance.

"You can judge how passionate a city is for basketball with how they treat their mediocre years," said Van Gundy, who serves as a commentator for ABC and ESPN. "They still had a great fanbase when they even had just OK teams. I think that speaks a lot to how important basketball is here."

Domestic television ratings records seem to be broken with each game. Viewing parties are being held in bars, town squares, movie theatres and even football stadiums across the country.

The team's fans travel well too.

When "Let's Go Raptors!" chants broke out in Oracle Arena late in a Game 4 road win, it got people's attention.

"They used to come deep into Detroit, their fanbase," said Barry, who spent two seasons with the Pistons. "And what I saw the other night in Oakland -- I've done 12 straight Finals and I've never seen an opposing team have that many people on the road supporting the team. It was incredible."

Canada's Team? The Raptors certainly are this spring.

You know something unique is happening when a club is a hot buzz subject among Canadians with little interest in basketball or sports.

"It's exposing basketball and the Raptors to more people than otherwise probably would have watched it," said Canada Basketball president and former Raptors executive Glen Grunwald. "It's a lot of fun to get involved in a championship run and the casual sports fan will be more engaged naturally than they normally would otherwise.

"It just exposes more and more people to sport, to basketball, to how enjoyable it can be, what fun it is to watch and what an exciting enterprise it is. It's only going to grow the sport, grow the participation and grow the fans. It's really a wonderful development for our sport."

The main difference for this edition of the Raptors was the blockbuster off-season acquisition of superstar Kawhi Leonard, a dominating force at both ends of the floor.

Veterans Marc Gasol, Kyle Lowry, Danny Green and breakout player Pascal Siakam are the other anchors of a team that has two more chances to knock off the two-time defending champion Warriors.

If Golden State forces a decisive seventh game, it would be played Sunday night at Scotiabank Arena.

A title would send the Ontario capital into a frenzy since Toronto's last major sports championship at the Big Four league level was way back in 1993 when the Blue Jays won the World Series.

Whatever happens, the Raptors will have left an indelible mark on the city, province and the country, which bodes well for the team in the future.

And of course once the series ends, the focus will quickly shift to the upcoming free agency period and Leonard's plans.

He has yet to discuss his future but a return would instantly soothe the worries of an anxious fanbase that desperately wants the club to build around a superstar in his prime.

Van Gundy said while he doesn't know what potential free agents might value when it comes to their decisions, he believes the franchise has a lot to offer.

"If you love a great city with superior ownership that's committed to winning and a fanbase that is passionate 365 days a year, then this is your place or a place you'd consider," he said. "If you want sunshine and you want tax benefits, maybe you go other places, I don't know.

"But I'll tell you one thing, your career goes quickly in the NBA and to do it in front of these type of fans in this cosmopolitan city, I'm not sure there could be that many better options."