TORONTO -- A Toronto nurse is grateful to be alive after a frightening collision with a dump truck that twisted her small vehicle sideways and then continued to push it at least half a kilometre on the Gardiner Expressway in Toronto.

Courtenay Erhardt, 26, has been helping vaccinate people experiencing homelessness and was on her way to work driving her BMW Mini Cooper at the time of the crash.

"[The dump truck] just sort of bumped my back rear-end and unfortunately I went sideways and the truck just continued to go up the ramp," Erhardt told CTV News Toronto on Wednesday. 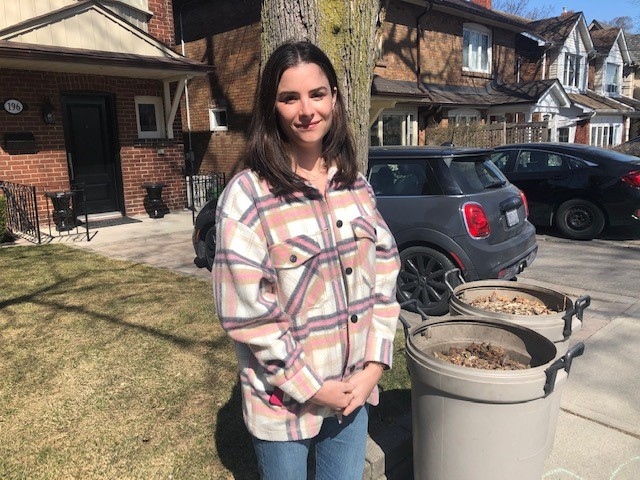 The crash happened Tuesday morning around 10 a.m at the intersection of Lake Shore Avenue East and Jarvis Avenue in the westbound ramp.

An aerial view of the car being pushed sideways was captured and shared on social media.

"I just remember holding my horn and my steering wheel and just screaming. Just like bawling and screaming. I honestly didn't know if my Mini was going to flip, or veer out into oncoming traffic on the Gardiner," she said.

"I just remember thinking, 'Why isn't he stopping? Why is he still going?'"

She said it wasn't until a couple driving nearby on the highway noticed what was happening, and took heroic actions.

"A couple that was behind the truck saw the smoke and they saw me," she said. "And they just saw me bawling. They called 911 right away."

Erhardt said first responders told her she was lucky to be alive, that the distanced she travelled was more than 500 metres.

Toronto police said the driver of the dump truck was charged with several driving and commercial motor vehicle offences.

In statement to CTV News Toronto, Sgt. Murray Campbell said when it comes to large vehicles like dump trucks on the road, the utmost care must be taken to ensure everyone's safety.

The driver of this Mini was lucky to escape with minor injuries after being pushed for over half a kilometre up an on-ramp and onto the Gardiner Expressway yesterday. The dump truck driver was charged.#beaware#drivesafe pic.twitter.com/ZNuZSUgiTB

He said it's recommended people ensuring positioning to view the truck driver, giving the driver the best opportunity to view them.

"Create a safe distance, to enable the opportunity to react. This goes for all road users and depending on the situation, off road and on private property also."

Erhardt said she’s a little sore — but escaped the crash without a scratch.

On top of thanking everyone who assisted in the collision, she also credits her Mini Cooper for keeping her safe.

"Honestly, I believe the reason I'm here doing this interview is because of how well-made Mini Coopers are. It's beaten up completely and I think it’s a write-off, but it saved my life. My airbags didn’t even go off," said Erhardt. "It's amazing. I'm so grateful."