TORONTO -- The Ontario government says that the provincial framework to restart the economy will be released as early as next week.

The news comes days after Premier Doug Ford revealed that he has been facing mounting pressure to reopen Ontario's economy following new COVID-19 modelling data, which suggests community-spread cases may have peaked.

"The first priority is making sure we protect the health and well-being of the people of Ontario," Ford said at a news conference on Friday.

Ford says that the government's "gradual and measured" approach will rely on the experiences of provinces like Saskatchewan, which laid out its plan to jump start their economy on Thursday.

"Saskatchewan has a much, much smaller population and large area," Ford said. "But we always look at other models right across the province—actually, we look at models right around the world, to see what’s working, what’s not working, and take the best ideas off them."

It's unclear which parts of the province will open first. Both Ford and Finance Minister Rod Phillips said that the movement of residents is something that will weigh heavily on the government's eventual rollout of opening non-essential businesses.

In the meantime, the province says it is providing desperately needed financial relief for small businesses and landlords struggling amid the COVID-19 outbreak.

The province is committing $241 million through the Ontario-Canada Emergency Commercial Rent Assistance Program (OCECRA), in partnership with the federal government, to assist those in need.

In total, the provincial-federal relief fund will see $900 million handed over to those most affected.

On Friday morning, Prime Minister Justin Trudeau announced that an agreement has been reached between the federal government and all provinces and territories to implement the promised rent assistance program for businesses. 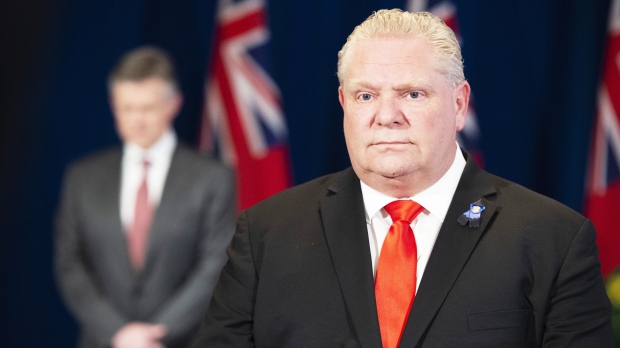 The agreement will see rent lowered by up to 75 per cent for eligible small businesses that have been impacted by COVID-19, if their landlords agree to take part.

"We are doing everything we can to support them through these tough economic times, so they can hit the ground running when we are in a position to open up the provincial economy," Ford said.