What's behind a so-called $100M 'greenbelt gamble' in Vaughan?

What's behind a so-called $100M 'greenbelt gamble' in Vaughan?

A Vaughan city councillor is calling on the government to stop the process of removing land from Ontario’s Greenbelt until it can be assessed fairly, as a developer in her ward seeks to “correct misinformation” about the terms of its land purchase.

Marilyn Iafrate, Vaughan’s city councillor, said she has received complaints from developers who believe their land is more “shovel ready” than the plots picked in the consultation by the provincial government as it looks for land to build tens of thousands of new housing units.

“There’s no faith, no logic, no science, nothing that was used to choose this parcel of land,” Iafrate said in an interview with CTV News Toronto.

“I personally think they should stop this process and start it again with clear guidelines that are open to everyone. This was done behind closed doors and that’s not right,” she said.

The provincial government has proposed to remove several pieces of land from protected status in the Greenbelt to urgently build housing — a decision that prompted protests over the weekend from those who say the housing can be built without disturbing protected land.

In Iafrate’s ward there is a 100-acre parcel off Pine Valley Drive that records show was purchased in May of 2021 for $50 million by a company called TACC Developments (Block 41) Inc.

Land title documents show that there is a $100 million charge on the property, ostensibly at 21 per cent interest — something seized on by NDP MPP Jeff Burch as a “greenbelt gamble” in Question Period in Ontario’s legislature last week.

“In the minister’s experience, is a 21 per cent interest rate on $100 million a good deal?” Burch asked, pointing to a large financial gain for the principals, the De Gasperis family, as “early estimates find that the soon-to-be-newly-developable land could be worth at least $380,000 an acre. That’s a big payoff for a greenbelt gamble.” 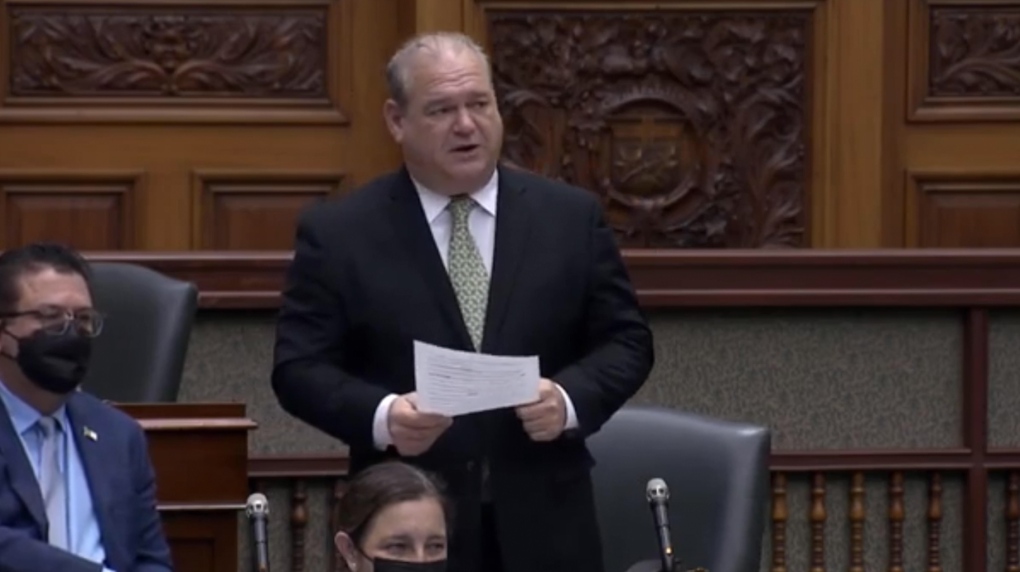 NDP MPP Jeff Burch is seen in Question Period.CTV News Toronto approached TACC Developments to ask for more information on the deal. The company responded by saying the terms of its loan on the property on Pine Valley Drive have been misunderstood, calling that understanding of the purchase “misinformation.”

Sandra Galassi, on behalf of TACC, said it purchased the 100 acres of land for its established development well before any public discussion of the Greenbelt, which makes up about 10 acres of the property on its western edge.

“To be crystal clear, we bought the 100 acre parcel because much of it was already designated for development as part of the Block 41 community plan and we already own 200 acres of other developable land in that Plan. We did not purchase the parcel of land for what was in the Greenbelt. It was just part of the parcel, as is customary to acquire lands that both include developable tableland, non-developable or greenbelt lands,” said Galassi.

TACC Developments (Block 41) Inc. borrowed $30 million to purchase the land, Galassi said, and took out a $100 million loan for future development costs. The interest rate was not 21 per cent, but prime plus 75 basis points, she said.

A representative of the Canadian banking industry confirmed that it is standard practice for banks to register charges on properties for 21 per cent, which is an amount that can be superseded by a loan agreement between the bank and the developer.

In that way the terms can be modified beneath the 21 per cent envelope without requiring new paperwork to be filed, the industry expert said.

“We give to all political parties and have always done so. We understand that political contributions are a democratic imperative. We also give to many other worthy community needs, like health care,” Galassi said.

On Monday, Green Party Leader Mike Schreiner asked in Question Period, “Will the Premier listen to the people who don’t want him to touch the Greenbelt, or will he listen to land speculators who want to pave over the people’s Greenbelt?”

Housing Minister Steve Clark responded, “Half a million Canadians are going to come here. That’s why we’re putting forward policies, procedures, bills, regulations, to get shovels in the ground.”

Ontario's Ministry of Municipal Affairs and Housing told CTV News Toronto in a statement, "The government is carefully reviewing the feedback received through consultation which will help inform our next steps. We look forward to sharing the outcome of the consultation in the near future."