WARNING: Details in this story may be disturbing to readers.

TORONTO -- New video obtained by CTV News Toronto shows the moments residents realize a man is trapped on an eighth-floor balcony during a fire at a North York apartment building on Friday.

CTV News has decided to only air a small portion of the video and not show the man. In it, people can be heard calling for the man to jump.

One person died in the fire and was located on an eighth-floor balcony. The person has not been identified.

Speaking to reporters Saturday afternoon, Toronto Fire Chief Mathew Pegg said he was frustrated that conditions prevented firefighters from getting to victims sooner.

The five-alarm fire displaced hundreds of residents, many needing to be temporarily relocated to an athletic centre at York University Sunday afternoon.

The fire tore through the 15-storey building at 235 Gosford Boulevard, near Jane Street and Steeles Avenue just before 5:30 p.m. forcing tenants to evacuate. 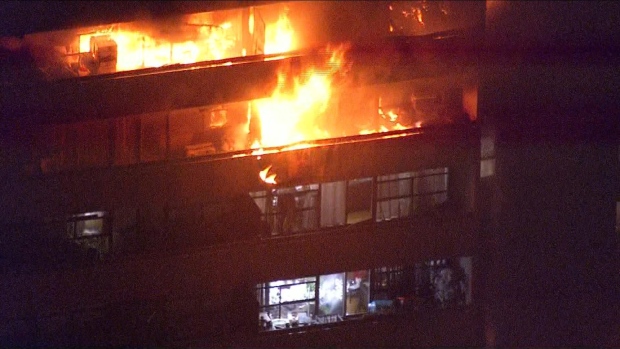 At the fire’s peak, Toronto Fire Chief Mathew Pegg said 20 trucks and roughly 100 firefighters were on scene to get a handle on the five-alarm fire.

Six people were assessed by paramedics at the scene and one person was transported to hospital in serious condition. That person’s condition has since improved to stable.

Several hours later, Toronto Deputy Fire Chief Tony Bovata said that a body was found just after 1 a.m. on the balcony on the eighth floor. Police have not released information on the deceased. 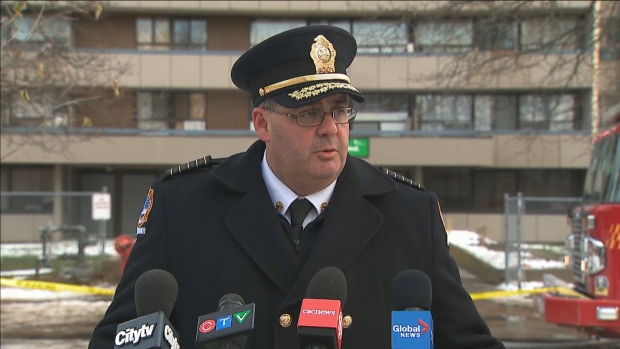 Officials confirmed that three floors of the building sustained significant damage and every unit was evacuated due to the fire.

A series of inspections will need to be conducted before anyone can return to the building.

In a news release issued Sunday afternoon, the city said that an investrigation into the origin of the fire is currently underway.

"Toronto Hydro disconnected power to the building as directed by the Electrical Safety Authority and the building will not reopen until all repair work required has been completed by the owner. The investigation into the origin, cause and circumstances of the fire is being conducted by Toronto Police Service, Toronto Fire Services and the Ontario Fire Marshal."

As a result, the city of Toronto has partnered with the Red Cross to open up a shelter at the nearby Driftwood Community Centre. On Saturday, officials said that the Red Cross is providing lodging and shelter to roughly 354 residents displaced by the fire.

A portion of those residents will be transported to York University’s Tait McKenzie Centre later today, where they will be housed temporarily. The city also said that it will also provide accommodations to any of the remaining tenants who have not yet registered at the community centre.

“Right from the get-go it was my sense that York University would be far more comfortable for people," Ward 7 Coun. Anthony Perruzza said, speaking to CP24 outside the Driftwood Community Centre on Sunday. "The facilities are bigger, better showers, lots more space to move around."

Thank you @yorkuniversity for opening your doors to help accommodate the ~700 displaced residents in need of shelter in addition to Driftwood C.R.C.@YorkUPresident

There’s no word yet on when residents will be allowed back into their homes.

With files from Codi Wilson.