TORONTO -- Video has emerged showing the moment an Air Canada plane hits another aircraft on the tarmac in Toronto.

Air Canada confirmed to CTV News Toronto the incident occurred on Dec. 27 at Toronto Pearson International Airport during the towing of an Air Canada Boeing 777.

The wing of the Boeing 777 is seen in the video clipping the tail of an Airbus A321 that was parked on the tarmac. 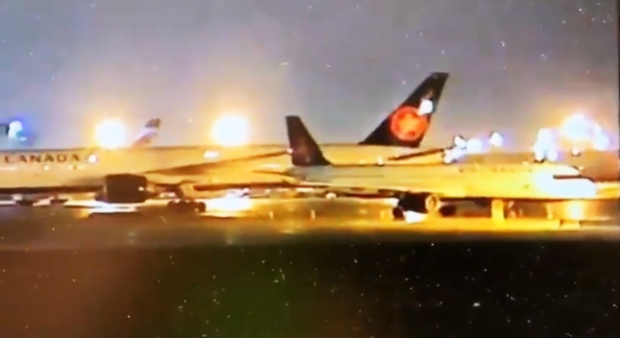 Both aircraft were empty at the time and there were no injuries, an Air Canada spokesperson said Tuesday.

Air Canada said the Boeing 777 has since returned to service but the A321 is still being repaired.

The investigation into the crash is ongoing.

Update INCIDENT Air Canada Boeing 777-300 that struck the tail of an Airbus A321 now parked outside the hangar in Toronto. Wingtip has been repaired. It’s now back in service however it was scheduled for a C Check prior to collision. Possibly ferry to Singapore for that check. pic.twitter.com/kBnvDh12Ti