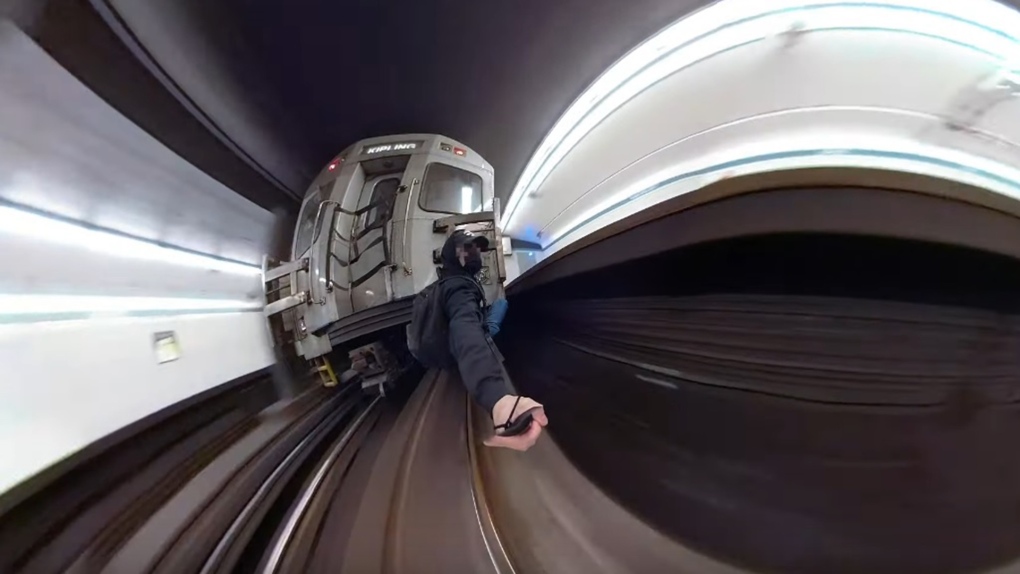 A man is seen riding on the back of a TTC subway train in a YouTube image.
TORONTO -

The TTC says it is investigating a video posted by a man who hung from the back of a moving subway train for more than three minutes along Line 2 sometime earlier this month.

In the video posted on Sunday, the man climbs onto the back of a subway train as it is about to depart Bathurst Station, heading eastbound.

He carries a selfie stick with a device using an extreme wide-angle or “fisheye” lens. He waves at a passenger on the platform at Bathurst.

As the train accelerates, the man holds onto a short step ladder extending from the rear of the train with one leg and one arm, shifting the selfie stick into different positions as the train reaches full speed.

Upon arrival at Spadina Station, a train operator at the rear of the train spots him and he quickly runs up the steps and out of the station.

“The conductor was less than thrilled when he saw me jump off at the next station,” a caption beneath the video posted to YouTube reads.

TTC spokesperson Stuart Green says the organization is aware of the video and an investigation is underway.

“It has been turned over to our Transit Special Constables to investigate,” Green said Monday.

He said that they believe the incident occurred sometime before August 20, as the train in the video was taken out of service on an unrelated matter after that date.

“It probably goes without saying that this kind of stunt is not only incredibly dangerous and irresponsible, it is illegal and will be treated as such,” Green said.

The account where the video was posted, ChaseTO, also features clips of people climbing to the top of Niagara Fallsview Casino and the former Kingston Penitentiary

A revived Hurricane Ian threatened coastal South Carolina and the historic city of Charleston with severe flooding Friday after the deadly storm caused catastrophic damage in Florida and trapped thousands in their homes.