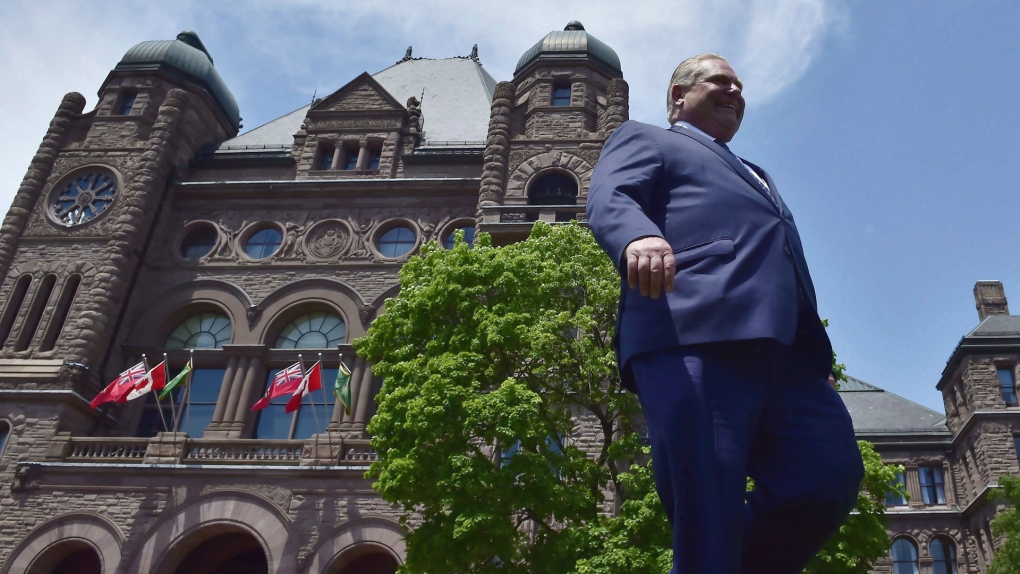 Ontario premier Doug Ford walks out onto the front lawn of the Ontario Legislature at Queen's Park in Toronto on June 8, 2018. THE CANADIAN PRESS/Frank Gunn

TORONTO -- Ontario's sudden cancellation of curriculum writing sessions designed to fulfil findings of the Truth and Reconciliation Commission has Indigenous leaders and others expressing concern and calling it a "step backward" on the road to reconciliation.

The Ministry of Education cancelled the sessions -- scheduled for two weeks this month -- after the Tory government, which took office June 29, clamped down travel spending across the public service.

The cancelled sessions were aimed at enhancing Indigenous perspective in the province's school curriculum.

Perry Bellegarde, National Chief of the Assembly of First Nations, said in a statement that the cancellation appears to contradict a commitment by the provincial government.

"Ontario committed to working with Indigenous partners to address the legacy of residential schools," Bellegarde said. "Premier Doug Ford needs to tell us how his government plans to deliver on the TRC Calls to Action."

When the report was released in 2015 it called the system nothing short of a "cultural genocide" and made 94 broad recommendations, or Calls to Action, covering everything from greater police independence and reducing the number of aboriginal children in foster care to restrictions on the use of conditional and mandatory minimum sentences.

"We have heard from many educators, elders and knowledge keepers and share their frustration as this important work was dropped just before it was set to begin," Fox said in a statement. "This is a step backwards on our journey towards reconciliation. The education of the youth in Ontario shouldn't be dictated by the party in power, but left to professionals who acknowledge that identity-building is the only positive move forward."

Fox said the decision will impact Indigenous participants, many of whom had booked time away from work to attend the sessions.

"We are asking this government to reaffirm its commitment ... working with Indigenous partners to address the legacy of residential schools, close gaps and remove barriers, support Indigenous cultures, and reconcile relationships," he said.

Ben Menka, spokesman for Education Minister Lisa Thompson, said the government will continue to move ahead with the updated Truth and Reconciliation Commission curriculum revisions.

"The ministry will work with experts, elders and Indigenous communities to develop the support materials for the updated curriculum," he said in an email, adding that the ministry moved ahead with the cancellation without direction from Thompson.

"In keeping with the commitment Premier Doug Ford made to run government more efficiently, all ministries will seek to carry out initiatives in the most cost-effective way possible," Menka said.

NDP legislator Peggy Sattler slammed the Tory government for making the decision to cut the sessions behind closed doors.

"Indigenous education benefits all students, and promises a better shared future. Scrapping the TRC curriculum writing sessions at the last second is a damaging step backwards on the road to reconciliation -- and it sends a horrible message to Indigenous communities about their importance to the Ford government," Sattler said.